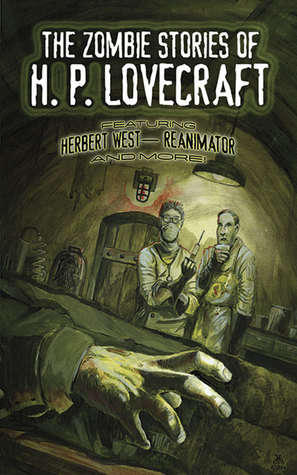 Today when we think of horror our minds bring about images of Stephen King’s It and a pile of his other books or George Romero and Wes Craven in the film world. Horror has taken on a certain violence to create fear in the audience, and the latest wave of torture horror movies move to shock the viewer. But before Dawn of the Dead and The Walking Dead there were the original horror and zombies tales. Before all this, a man named Howard Phillips Lovecraft produced some of the best original horror in American literature. During his lifetime, he was virtually unknown except in pulp magazines. He gained fame after his death and even among non-readers many horror fans know of Reanimator, Dagon, and the Cthulhu South Park episode.

What separates Lovecraft from other writers is his sense his writing leaves on readers. The zombie stories in this Dover collection, although not including the popular Cthulhu mythos, display some of the finer work of the writer. From the opening story “The Outsider,” the reader experiences something more than typical horror. There is an overwhelming feeling of dread and despair that lingers long after reading the story. The reader will feel the darkness, the cold stone enclosure, the damp, moldy, mossy passageways. It is not torture or violence that create the fear it is the setting and inserting the reader into hopelessness that surrounds the characters. That is the stuff of nightmares. It lingers deep in the brain almost as a personal experience.

Lovecraft creates lasting horror images. Whether the image is Herbert West’s pathological drive, Egyptian mythology, or the killing of one’s best friend there is a soul-wrenching memory created in the reader’s mind. He or she feels as helpless as the characters in the story. Simply putting the book down and walking away is nearly impossible. It will haunt you. Your only hope is to finish in a vain attempt to find closure. An excellent introduction to the master of horror.