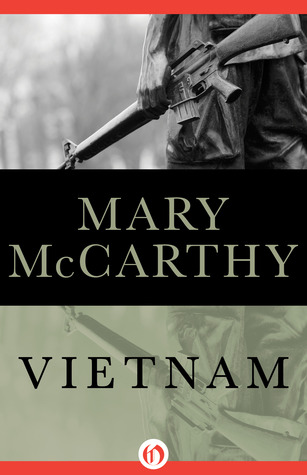 Vietnam by Mary McCarthy is an interesting look at the Vietnam War at its height. I was expecting an all out attack on the war, but instead, I received something very different. There is no doubt McCarthy is against the war. She is very clear on the subject.

McCarthy attacks the government’s bureaucrats, but strangely holds a soft spot for the men, or boys as she calls them, who are fighting the war. She dealt with a number of Marines in country and was taken back by their honesty. When she asked about land redistribution and what is being done about it, the bureaucrats stumble and fumble trying to fit ready-made answers to the question. A Marine Colonel interrupts with “Absolutely nothing.” She talks to corpsmen and navy doctors who treat the civilian population. They explain the work they do and the referrals they make but do not understand there is no hospital space for their patients.

McCarthy also speaks of her anti-war position. By this time, no one really supports the war, but like Johnson said, “But, we are there.” So even though the pro-war position sits on their mountain of errors, they look down on those who oppose them. How does one bring home 452,000 military personnel? Do we abandon those in Vietnam the risked their lives supporting America? Is communism any better than corruption?

What I admire about McCarthy’s position is that she learns from her experience. She still opposes the war but recognizes that many in the military believed they were honestly doing the honorable thing. Of course there are exceptions. On Marine Colonel, she met set up a relocation camp and in its center was a huge bronze $. This Marine could very well have been the fictional Colonel Walter E. Kurtz. McCarthy came to respect those in the military on the ground and despised the bureaucracy behind the war and formulas and their false intellectualism.

I am not a supporter of the war. I remember older kids in my neighborhood disappearing in the draft while I was growing up. I remember some returning home and others not returning and a gold star in their parents front window. The war was a dividing time in American history and for a journalist opposed to the war to recognize that some truly believed they were doing good is something worth noting.

One response to “Book Review — Vietnam”