“I loved this place, its shabby elegance, and the history it held so possessively” ~ Patti Smith 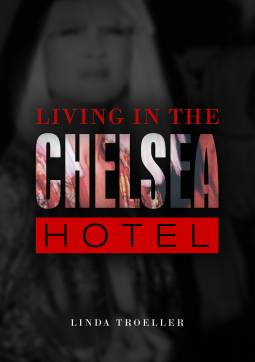 Living in the Chelsea Hotel by Linda Troeller is a pictorial and written history of the Chelsea Hotel featuring the last few decades. Troeller is a renowned photographer and her art appears in several collections including the Smithsonian. She has an MFA from School of Art, and an MS Newhouse, Syracuse University and a BS from Reed School of Media, West Virginia University. Previously, she was an assistant at the Ansel Adams Workshops. Troeller has taught at SVA, Parsons, NY, University of Nevada, Las Vegas, Indiana University, and Stockton University.

The Chelsea Hotel is one of those almost mythical places like CBGBs that many of us heard about growing up in the 1970s. It was the darker, seedy, punk rock part of music and art. NY had that rough, tough image and the music to back it up. My first recollection of the Chelsea Hotel was though Patti Smith photographs in Creem, Circus, and Hit Parader taken by Robert Mapplethorpe. Later I would learn Nancy Spungen died there. There would be a long history of 70s rockers and punks who would reside there.

The hotel was built in 1883 and would house many famous people in its time: Dylan Thomas, Mark Twain, and Science Fiction writer Arthur C. Clarke and producer/director Stanley Kubrick. Some other notables in the twentieth century are Jean-Paul Sartre, Tennessee Williams, Janis Joplin, and Jack Kerouac. Madonna who lived there in the 1980s returned to shoot some of the photographs for her book “Sex.” The hotel stopped taking reservations in 2011 and plans to reopen after renovations next year.

Troeller contributes photographs and tells of her time in the hotel as it closed around her. The photos are blurry in some cases I am not sure if it is because of the PDF format and file size or for the art value. There is a sadness in many of the photos. Empty walls are now displayed that were once covered with artwork. The renovations present the hotel with an almost skid row effect. The hotel used to be an artist haven even in the final days the picture of the mailroom mailboxes are filled with what looks to be prints and manuscripts. The concern today is that it will be used simply as a profit source drawing customers into a safe and sanitized building while exploiting the seedy and storied history.

Troeller does a more than adequate job of capturing the dying breaths of the old hotel. Her experiences and that of select former residents add to the value of this book; it is more than just a photo shoot. It is an interesting look at American history. We tend not to value the past and rather have the new and improved only to wonder years later what happened to our past. 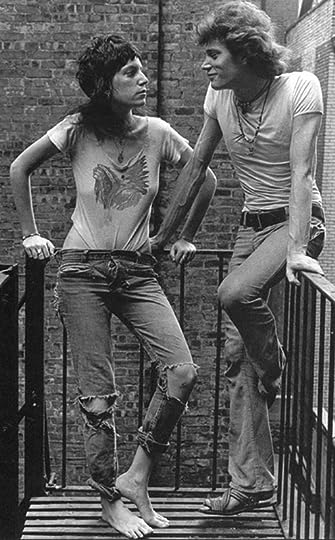 Patti Smith and Robert Mapplethorpe at The Chelsea

3 responses to “Book Review — Living in the Chelsea Hotel”