Book Review: Shout It Out Loud: The Story of Kiss’s Destroyer and the Making of an American Icon

You wanted the Best, You got the Best, The greatest band in the world…KISS 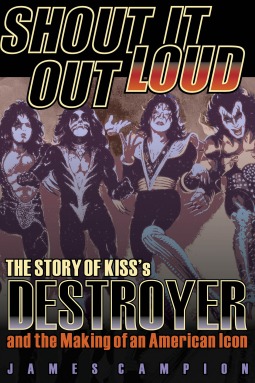 Shout It Out Loud: The Story of Kiss’s Destroyer and the Making of an American Icon by James Campion is the history of Kiss up to and including the making of Destroyer. Campion is the Managing Editor of The Reality Check News & Information Desk and the author of Deep Tank Jersey, Fear No Art, Trailing Jesus, and Midnight For Cinderella.

It’s hard to believe that Destroyer was released forty years ago. I was introduced to Kiss by a school friend when I was in that musical stage of moving out of AM Gold and into progressive rock. Eventually Kiss and Led Zeppelin posters covered most of the empty wall space in my room, and CREEM magazine replaced MAD as I began to take music seriously. A good part of growing up in the 1970s included quite a bit of KISS. It was hard, loud, and its simple message. Today, however, the music seems tame. The rhymes and lyrics are almost humorous at times:

You were distant, now you’re nearer
I can feel your face inside the mirror
The lights are out and I can feel you, baby, with my hand.
~ C’mon and Love Me

Still I manage to listen to KISS with fond memories of youth.

Shout it Out Loud tracks Kiss from its early roots to finally making it big with Destroyer. It’s hard to believe that KISS almost didn’t make it. Their early albums floundered which is difficult to believe with songs like “Deuce”, “Strutter”, and even “Rock and Roll All Night”. KISS created a frenzy at live shows with pyrotechnics and Gene Simmons spitting fire and “blood.” The act, however, did not transfer into studio success. The band was tanking and released “Alive” as an act of desperation in 1975. The impossible happened. The live album sold, and sold, and sold. The same studio songs that fizzled now sold. Kiss was about the act as much as it was about the music. “Alive” captured some of the act and saved the band so that Destroyer could be produced.

The making of Destroyer reveals much about the band and its members. From the drinking and drug use of two members and the unexpected tea toddler to the songs that made it to the album, Campion writing and history will capture any fan’s attention. Alice Cooper fans will also enjoy this book as both bands shared producer Bob Ezrin who left his mark on their music. KISS moved from being a raw power band to a more refined rock band under Ezrin drill instructor type leadership.

Shout It Out Loud is an excellent look at the evolution of one of the most recognizable bands in rock history. It is not an easy ride and there are more challenges than most people can expect. It was not an easy way to the top for KISS and their contemporaries in Australia, AC/DC, may just as well be singing about KISS when they played:

Ridin’ down the highway
Goin’ to a show
Stop in all the byways
Playin’ rock ‘n’ roll
Gettin’ robbed
Gettin’ stoned
Gettin’ beat up
Broken-boned
Gettin’ had
Gettin’ took
I tell you, folks
It’s harder than it looks