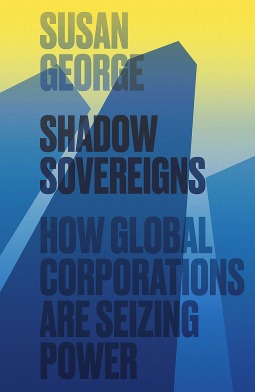 Shadow Sovereigns: How Global Corporations Are Seizing Power by Susan George is a book that I looked forward to reading. George is an American and French political and social scientist, activist and writer on global social justice, Third World poverty, underdevelopment and debt. She is a fellow and president of the board of the Transnational Institute in Amsterdam. She is a fierce critic of the present policies of the International Monetary Fund (IMF), World Bank (IBRD) and what she calls their ‘maldevelopment model’. She similarly criticizes the structural reform policies of the Washington Consensus on Third World development. She is of U.S. birth but now resides in France, and has dual citizenship since 1994. George attended the Sorbonne, obtaining the French equivalent of a bachelor’s degree in philosophy in 1967.

This is a book I really wanted to like and hold up like a beacon so that others could see. However, almost from the start I felt I was caught up in a Dennis Miller type rant, without the humor. I can say I agree almost entirely with George on her positions, but it is the presentation that troubles me. The book is written more as an angry rant than scholarly work or even a work that is looking to change people’s minds. She is preaching to the choir and alienating everyone else.

When discussing the legitimacy of government, I was looking for some Locke or Rousseau, instead there is an argument that corporations are taking over to the point of being able to sue governments. She does not even establish criteria for the legitimacy of a government.

The book is a rollercoaster ride through the wrongs in the world and the dismal state of democracy. It does cover many of the current failures of the system from Monsanto to the corporate takeover of national sovereignty. George also covers the growth of the pharmaceutical Leviathan, the disappearance of small farms, and climate change. Shadow Sovereigns could be a great book with a message to reach the masses, but it seems like George simply went on a rant while her editor was asleep. There is so much good information in this book. It is a shame it is not delivered in a more orderly or formal approach.

One response to “Book Review: Shadow Sovereigns: How Global Corporations Are Seizing Power”