Book Review — Marx After Marx: History and Time in the Expansion of Capitalism 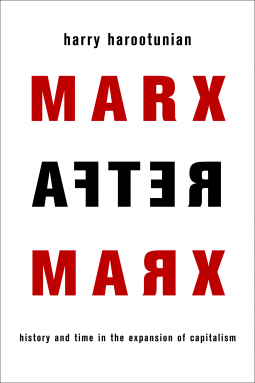 Marx After Marx: History and Time in the Expansion of Capitalism by Harry Harootunian is the study of political theory against history. Harootunian is adjunct senior research scholar in the Weatherhead East Asian Institute at Columbia University and Max Palevsky Professor of History Emeritus at the University of Chicago. He is also the author of History’s Disquiet: Modernity, Cultural Practice, and the Question of the Everyday Life.

Marx is important in history and he has left an impact on the world not only in the rise of communism in the USSR and China but in the lives of all who live in the free world. Marxism came at the time exploitation. Men, women, and children faced long and dangerous hours in factories. There was no forty hour work week or benefits of any kind. Child labor laws were nonexistent. In fact, I remember an editorial cartoon from a history course that showed a sick English woman and her several starving, rag dressed, children being evicted from their room because the mother could not pay the rent. Countering that was a sick slave father being tended to by his wife and children along with the master reassuring the family that everything will be ok. In a very warped sense, it was meant to portray slavery as more humane than the runaway industrial capitalism in Europe. Honestly, I would not want to be in either place.

Marx’s spectre that was spreading through Europe was real, and Marx’s failure was believing that the capitalists would not give in to the demands of workers. What happened instead was, that when faced with revolt, the capitalists blinked. Workers came to enjoy limited work weeks and vacations. Leisure time became something a common man could experience. With that came a rise in literacy and education. Everyone won, except Marx.

Harootunian picks up with what happened immediately after Marx. Communism splintered and took different paths trying to make up for Marx’s failure. Lenin is talked about and how Russia was made to fit into the communist mold with Leninism and Trotskyism. Russia’s experiment with Communism ends there. Stalinism was a dictatorship plain and simple and had little to do with Marxism. Stalin to communism is akin to terrorists and Islam. A hijacking of an idea.

Marx After Marx turns to later thinkers. Antonio Gramsci is discussed in the problems of the unification of Italy and cultural hegemony. The Frankfurt School is mentioned throughout the text. Breakaway thinkers and activists like anti-Leninist Rosa Luxemburg’s and Western Marxist Georg Lukacs’ theories are also covered. Regions and cultures also play a role aside from previously mentioned Italy and Russia; Japan, Peru, and former colonies are covered. Latin America is mentioned too. Although free from colonial rule for over hundred years it is still treated, by powers, as a colony.

Marx After Marx is not for the light reader. It is heavy in political theory and easily the most detailed I have read since graduate school. It is a rewarding read for those looking to expand on the original Marxist theory in real-world applications as well as theoretical thoughts. A difficult but rewarding read.