Book Review — The Impossible State: North Korea, Past and Future 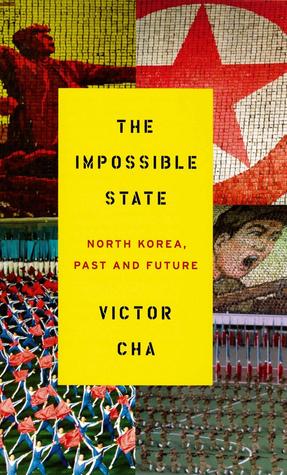 The Impossible State: North Korea, Past and Future by Victor Cha is the latest in books on North Korea. Cha is a former Director for Asian Affairs in the White House’s National Security Council, with responsibility for Japan, North and South Korea, Australia, and New Zealand. Cha served as President Bush’s top advisor on North Korean affairs. Currently, he holds the D. S. Song-Korea Foundation Chair in Asian Studies and is the Director of the Asian Studies program in the Edmund A. Walsh School of Foreign Service at Georgetown University. Cha is also senior advisor at the Center for Strategic and International Studies.

There have been several books on North Korea in the last few years. The one thing in common with them is that they repeat the same few stories. Granted North Korea is isolated and information is scarce, but there has to be more information. With Cha’s impressive background, I expected more information. He does repeat several stories or parts of stories that have been told and retold. However, he includes something that is lacking in other books. He goes into detail with North Korean relations with its neighbors and their history.

Key in North Korea’s existence is its ability to play countries against each other. Throughout the Cold War, North Korea played China against the USSR to its advantage. With the fall of the Soviet Union, both China and Russia turned their sites to better relations with South Korea. Better trade with South Korea was more profitable than supporting the North Korean Regime. The puzzling thing is why has North Korea been able to make itself so important. Korea had no strategic importance in the Cold War. There was no economic interest in North Korea, but the idea it was divided created an artificial interest in the area between the powers. Although nothing was worth fighting for neither power wanted to leave. China still has that problem of defending North Korea while enjoying profitable trade with the south. China has recently taken to extracting raw materials from North Korea as a form of trade basically reducing North Korea to an economic colony of China.

North Korea continues to confound its “enemies” as well as its allies. Kidnapping Japanese citizens, sinking a South Korean ship, defying the major powers in nuclear talks. North Korea acts like a spoiled child making outrageous demands and acting poorly in public and regional and international powers act like coddling parents. North Korea although does not have a nuclear delivery system it does have the means to deliver chemical weapons to South Korea and Japan. It possesses enough deterrent to make military engagement costly in lives and property.

Although Cha rehashes old stories and even repeats himself in the book, he sheds light on the North’s policies through its relations with its neighbors and trading partners. You can tell quite a bit about a person by the company he keeps. The same can be said of a country. North Korea does not allow much to be seen inside its borders, so what they show outside their borders is the best we can get and adds greatly to the little we know about North Korea.

I purchased this book from Amazon.com

2 responses to “Book Review — The Impossible State: North Korea, Past and Future”