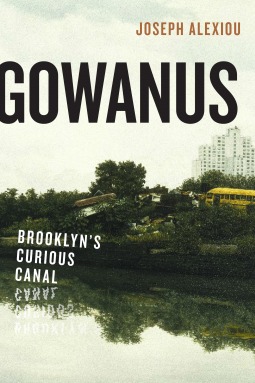 Gowanus: Brooklyn’s Curious Canal by Joseph Alexiou is the history of the role of the Gowanus Creek and later canal in the development of Brooklyn. Alexiou is the author of Paris for Dummies and a contributing author to Frommer’s Paris 2012 and has written for New York, the New York Press, New York Observer, Gothamist and Paper magazine. He is an associate editor at Out magazine and has a master’s degree from the Graduate School of Journalism at Columbia University.

I grew up in Cleveland, Ohio in the 1960s and 1970s. Cleveland was the poster child for pollution. Lake Erie was mostly dead water and the Cuyahoga River caught on fire (Several times but one that gained national notoriety). The steel mills produced a dark cloud over the city and houses in the area were dusted in a brown particulate matter. How bad could the Gowanus Canal be in comparison? I asked writer and fellow Clevelander, now New Yorker, Kathryn Schulz on Twitter. She made a comment about preferring to swim in the Gowanus than work on the piece she was writing. I asked, “Can it be any worse than the Cuyahoga?” The answer was, “Yes. By a lot.” That scared me.

Alexiou writes a history of Brooklyn from Dutch time to the present. I was expecting more of an environmental study. Instead, it is written like a biography where the subject of the biography is an anchor point for historical events surrounding him or her. The Gowanus Canal (or Creek) is the anchor point in a history of Brooklyn. A good portion of the book concerns the period between Revolutionary War and Civil War when the waterway was still a creek. Brooklyn wanted to be the shipping center of New York and converting the swampy land surrounding the creek into navigable canal surrounded by industry was the goal. The major problem was the cost of not only building a canal but the draining of the swamp lands.

The history takes the reader through several movers in the development of the land and the failed and uninitiated plans. The Gowanus was used as a sewer early on and as the population grew this became a problem. Engineers believed that the tidal currents would be enough to clear the creek of pollution, but things are not usually that simple. Chicago for example, reversed the flow of the Chicago River to clear pollution from its river. Things would not need to be as extreme for the Gowanus, but it cost more than the city was willing to pay.

The creek was the source for oysters, crabs, and fish but the pollution levels killed all life in the canal. The sheen of pollution on the surface only hid the sludge build up on the bottom. Today, although not a place to swim, crabs and fish have returned. I encountered only one pollution report of the canal and it was bad, worse than the Cuyahoga.