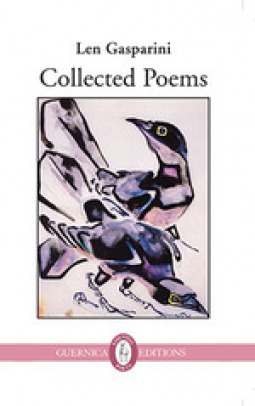 Collected Poems: Len Gasparini by Len Gasparini is a collection of the poets half century of writing. A native of Windsor, Ontario, Gasparini has written poetry, fiction, nonfiction, plays, and children’s books. In 1990, he was awarded the F.G. Bressani Literary Prize for poetry. In 2010, he won the NOW Open Poetry Stage event. Having lived in Montreal, Vancouver, New Orleans, and Washington State, he now divides his time between Toronto and his hometown.

When your collection opens with a poem about rock and roll, it really sets the tone. Gasparini was really influenced by his hometown, across the bridge from Mo-Town. His early poems speak quite often of Lake Erie, Detroit, and his home, Windsor. Later his subject changes as he moves to different cities. The chronological order of his poems allows the reader to track Gasparini’s movements across the two countries. Some poems, however, like “Grapes” jump the ocean to Tuscany before returning.

It is said that a picture is worth a thousand words, but Gasparini paints a thousand pictures with his words. His ability to observe and relay that information back to the reader produces an image sharper than our eyes can detect. From poems like “Indian Serenade” where complex scenes are described and the imagination builds to created events to poems like “Centipede” and “The Earthworm” where the mundane is brought to new light, Gasparini is a master of converting vision to words. For example, the two line poem “British Columbia” speaks volumes:

Gasparini also likes to have fun. “Pickup” is a poem of two undercover vice officers that mistakenly try to arrest each other in a bar. He also takes a swipe at a book reviewer who lives in a mushroom colored room. The poems from his time in New Orleans also take on a fun and gritty tone. Fun is fun, but the reader is brought back to a reality quite quickly with “The Buffalo Nickel.”

Collected Poems is a rare example of great poetry for all readers. The subjects and language will not scare off a novice interested but uneasy about embracing poetry. For the lover of poetry, there is so much present in this collection. The simple style is not used played down to the mass audience, but to deliver a deeper vision. Unlike Robert Frost, Gasparini does not take the road less traveled, rather he wonders why Frost just did not blaze a new road through the yellow wood. Then looking at his choices he blazes his own path in North American poetry. An outstanding collection for everyone.