Book Review — The Road Not Taken: Finding America in the Poem Everyone Loves and Almost Everyone Gets Wrong 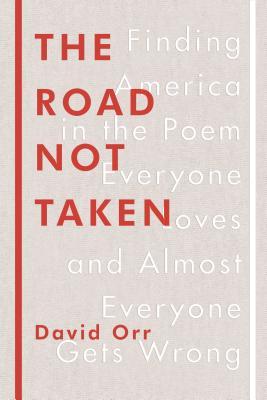 The Road Not Taken: Finding America in the Poem Everyone Loves and Almost Everyone Gets Wrong by David Orr is a systematic critique of a poem nearly everyone knows. Orr is the poetry columnist for the New York Times Book Review. He is the winner of the Nona Balakian Prize from the National Book Critics Circle and the Editor’s Prize for Reviewing from Poetrymagazine. Orr’s writing has appeared in Poetry, Slate, The Believer, and Pleiades magazine. He holds a B.A. from Princeton and a J.D. from Yale Law School.

We all have been taught to follow the road less traveled if we want to be successful, to get ahead, to live a life adventure and prosperity. Our teachers and parents told us this and it is advice from one of America’s great poets.

Two roads diverged in a wood, and I—
I took the one less traveled by,
And that has made all the difference.

How could this advice possibly be wrong. I thought about this and reread poem again and again. What was actually written in the poem and what we have taken from the poem are two different things. It is a twenty line poem and we take from it only the last three lines with the assumption that it must be a summary of the entire poem. In fact, it’s not. Much like the Indian parable of the five blind man and the elephant, we only listen to one blind man to form our decision.

In summary: A man walking in a forest comes to a fork. Which fork to take. One has underbrush. The other is grass. They are both equally traveled. He chooses the grass. Years later his future self will recall the incident and with a sigh and a stutter, say he took the road less traveled and it made all the difference. The last three lines do not seem to accurately summarize the event.

Orr takes the reader through a short biography of Frost to include his created image of a Yankee farmer and the spirit of American individualism. His public image much like the last three lines of the poem does not live up to the reality of the situation. Frost was not much of a farmer, and had to travel to England to get his work published in something more substantial than a poultry magazine. He met and befriended Edward Thomas, who took a liking to Frost’s work. Frost and Thomas would take long walks through the forests and Thomas always hesitated and second-guessed decisions when choosing a path. After Frost returned to America in 1915 he wrote a draft of his famous poem. The poem’s original title was “Two Roads,” and he sent it Thomas, as a joke, playing on Thomas’ indecisiveness. Thomas did not catch the joke and thought the poem was exemplary.

The poem was more than just a joke, however, it became one of the most quoted poems in America. It also goes deeper as Orr shows the reader. Orr makes a note of one reviewer (Kathryn Schultz) calling the poem “The Path Not Taken.” It is a common mistake. You do not have to be a trail runner like Schultz to know that the woods contain paths and trails and not roads. Orr claims that this is deliberate. Roads are man-made and lead to a specific place, unlike many trails. Why doesn’t Frost’s traveler consider the destination when following a road? Why doesn’t he consider what most people would — the distance, the effort needed, and the destination? His only concern was which was more traveled, and they are both equally traveled.

The examination of the poem brings to question several items that are clearly visible in the poem. The traveler does not reflect on his choice, but the opposite. He sees his future self talking about this seemingly trivial decision. He sighs — sarcastically? He stutters on the word “I” like he is trying to quickly think of why he chose the path he did. He creates a reason that is different from what he observes on the road and makes it out to be much more than what it was.

Orr, a lawyer, tears apart the poems and like a lawyer, examines detail and shows, much like a TV defense lawyer, that what we thought happened certainly did not occur as we perceive it. Orr does this by examining the poem, the writer, the history, and the philosophy. I did not take his thesis too seriously until I reread the poem and discovered that there is much more to it than the last three lines. Orr’s research is very good and his explanations are clear and well presented. His depth of coverage is much deeper than what I presented here in my own summary in the fifth paragraph. Moreover, it’s rare that book makes the reader rethink something they believed their entire life and that is so well known in our culture and shows it to be wrong. Even the poem’s title is a bit misleading. All the difference is made from taking the road less traveled, then why is the poem titled after the road not taken?

Poetry is written to make us think. Once we take something for granted, on the word of others, the poem no longer holds it value as a poem and becomes something of a cliche. A friend with an English Ph.D. perhaps summed this up the best when she said, “Every thoughtful reading is legitimate.” That, perhaps, is what is needed of everyone — Read, think, form opinions, support those opinions, but most of all investigate. Orr opens that door for the reader to investigate.

4 responses to “Book Review — The Road Not Taken: Finding America in the Poem Everyone Loves and Almost Everyone Gets Wrong”