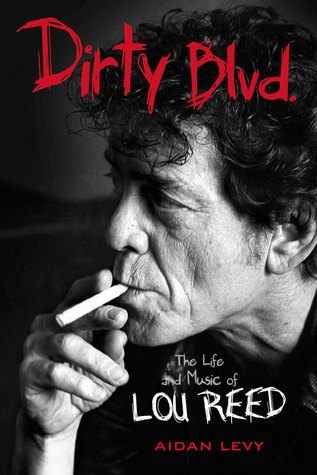 Dirty Blvd.: The Life and Music of Lou Reed by Aiden Levy is the latest biography of legendary punk rock icon Lou Reed. Levy has written for the New York Times, the Village Voice, JazzTimes, and the Daily Forward.

I remember hearing “Walk on the Wildside” on AM radio as a child. I had no idea what it was about or why the colored girls were singing. “Colored” was at the time still an acceptable adjective. But I was told not to sing bits of the song. I sensed there was something my eight-year-old brain was missing, and I was right. The radio was always playing when I was growing up and rarely was it ever turned down except when Lou Reed played.

Music stays with us our whole lives and I still listen to the groups and people that made an impression on my young mind — Lou Reed, Patti Smith, The New York Dolls, and the Ramones. Growing up in Cleveland we had a progressive radio station, WMMS that kept Clevelanders listening to the best music in the nation despite the cities many other problems. The music had a lasting impression on me.

Lou Reed is the angry, non-melodic, speeding, crass, poetic, godfather of New York punk. That line pretty much summarizes Lou Reed. He pushed limits and saved rock and roll from corporate arena rock and disco. Levy takes the reader through Reed’s entire life from childhood, to the Velvet Underground, through the solo years, and into the Rock and Roll Hall of Fame. Dirty Blvd is heavy on detail and periphery information. The making of all the albums are covered in detail as well as almost a blow by blow account of the making of Le Bataclan ’72, by far the most interesting story in the book. I did find myself a bit overwhelmed by details rather the story after “Sally Can’t Dance” but held on because I really wanted to read about my favorite album “New York.”

Dirty Blvd. is a good biography of Lou Reed and those around him. I am a fan of Lou Reed and his work, but something was missing from this biography. It didn’t grab me the way I would expect it too. The writing is clear. The information is plentiful, but I felt myself trudging through it at several points. A good book but doesn’t quite live up to my expectations of a man whose death was noted even by the Vatican’s cultural minister in a Tweet. Perhaps it is more research project than a heartfelt biography. I will give Levy the benefit of the doubt and not let my personal feelings interfere with my opinion of the book.