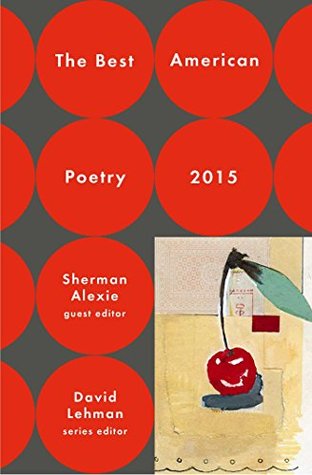 The Best American Poetry 2015 edited by David Lehman is a sampling of the best poetry of 2015. In 1994, Lehman succeeded Donald Hall as the general editor of the University of Michigan Press’s Poets on Poetry series, a position he held for twelve years. In 1997, he teamed with Star Black in creating and directing the famed KGB Bar Monday night poetry series in New York City’s East Village. He has taught in the graduate writing program of the New School in New York City since the program’s inception in 1996 and has served as poetry coordinator since 2003. He has edited The Best American Poetry Series since 1988.

The good news is poetry is still alive and well in America. The even better news is that unlike much of today’s published literature women poets hold the lion’s share of this collection. There is also representation on of writers with Asian, Indian, and African backgrounds. There is diversity in American poetry and it shows in this collection.

to seize the world, inside of its machine.
This is the way Calen ends, not with a bang

but a river. Woolf, too; she goes out
the same goddamn way.

Chen Chen pledges allegiance to the snow — both new fallen and tracked through. Denise Duhamel writes of fornicating and a breeze through a screen. Noah’s Ark is the subject of two poems and in Ellis’ version we read:

Galvin writes an ode to wedding dresses. Beautiful dress that are worn once or maybe twice and banished to a closet or perhaps Goodwill. The subject matter is broader than what one would expect in such a collection.

Lehman not only edits but writes a lengthy forward. Guest editor Sherman Alexie “writes” the introduction. It is not a traditional introduction but made up of a series of quotes by Alexie followed by his poem “Defending Walt Whitman.” Although unconventional it works very well. Following the poetry collection is a series of mini-biographies on the individual poets. I particularly like this feature because it allows the reader to know something of the poet’s background, other work, and their perspective.

There is a very good reason why Lehman has been editing this series since 1988. He does an outstanding job of not only bringing the best new poetry, but he covers a broad spectrum of poets and subject matter. I also would like to thank Scribner for allowing me to review the advanced edition of Best American Poetry for the last three years. It is something I look forward to every year, I and am never disappointed. Outstanding contemporary poetry.