Book Review — India at War: The Subcontinent and the Second World War 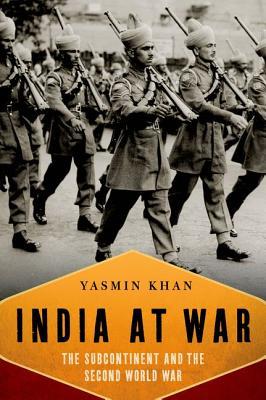 India at War: The Subcontinent and the Second World War by Yasmin Khan is the history of India’s involvement in World War II both inside and outside its borders. Khan is Associate Professor of History; Fellow of Kellogg College at Oxford University. Her DPhil is from Oxford, in the History of the British Empire. She has taught at the Universities of Edinburgh and Royal Holloway, University of London.

I knew little of India’s role in WWII before reading India at War. I did know of the Indian units in WWI fighting as part of the British Empire produced an impressive of Victorian Cross winners. Khan mentions this when talking about early recruitment in WWII. Older men, at the mention of war, would proudly display the medals they had earned in Europe and the Middle East. The people of Punjab seemed the proudest of their military tradition. India did send soldiers to fight in Africa against the Italians.Their bravery earned them the respect of many of the enlisted British soldiers while doing little to influence the officer ranks. Many who served outside of India were quickly put into uniform without much personal information or record keeping. This made identification and notification of next of kin nearly impossible in the event of death.

India itself was a strategic piece of land. With China slipping to the Japanese, India played a strategic role in resupplying the Chinese and as a barrier to Japanese expansion. Pro-independence India was thrilled when the Americans came to India. They saw an idealized image of America and hoped it would mean independence for them after the war. This hope faded as Indians saw how the black American soldiers were treated — much in the same way the British treated the Indians.

Khan not only covers the mechanics of India during the war but also the growing independence movement. Several paradoxes come to light. India wanted its independence from Britain, but Japan seemed like a more urgent threat. Many knew independence would eventually come from the British. Few believed that if Japan was victorious independence would come at all. There were also loyalists to the British who resisted independence and once the war economy began in full, with American assistance, many people became wealthier and enjoyed the status quo. Like the American move for independence, support was not universal.

Khan presents a detailed history of India during the war. It is much more than a history of a country at war, but a history of a diverse people looking to regain their identity. There is bravery on the part of Indian soldiers and bravery of those at home. India played a pivotal role during the war in Asia. Soldiers, industry, construction, food, and even POW camps were all part of India’s role. The war proved to be a shift in power. Although victorious, with the allies, Britain lost its ability to maintain an empire. Although devastating, World War II may have hastened Indian independence. India earned respect in the eyes of many nations, including Britain. India at War is an important piece of history that is not very well know in America. This is an essential reading for those wanting to know the bigger picture of the world history, outside American blinders.

2 responses to “Book Review — India at War: The Subcontinent and the Second World War”