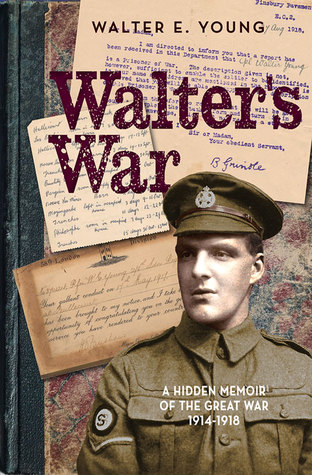 Walter’s War: A Lost Memoir of the Great War 1914-18 by Walter E. Young are the recollections of a British World War I infantryman. His writing were not intended for publication and Young didn’t talk about the war after his return. The passages are written in a detached way recalling the events in detail but without the emotion of a fresh experience. The result is a very informative and readable history.

Young was a postal worker before the war and signed up with the Postal Rifles. To encourage enlistments the military units were formed in groups the Royal Mail had their unit which was the above mentioned Post Office Rifles. This created comradery, but it has had devastating effects in other areas. In the mass slaughter that was the Great War units frequently were wiped out in the fighting. If a town formed a unit and it was annihilated in an offensive that town lost a large proportion of their male population.

Young volunteered for the war and reenlisted. The reenlistment was not so much out of duty, but a reasoned decision. If he reenlisted, he would remain in the Post Office Rifles and receive fifteen pounds. If he chose not to reenlist he would quite possibly be conscripted and sent to another unit as the war progressed. With the amount of death Young saw, that possibility was very real. Young served his time in the infantry and later as a stretcher bearer. The latter also resulted in becoming a prisoner of war. He remained religious and did not drink. He dealt with the horrors of war with is faith rather than a bottle like many did. I do not think he resorted to calling the Germans any of the common slurs. Even as a prisoner, he met both good and bad Germans and judged them as individuals.

He recalls once a German yelled at him to get down then fired over his squads head. That seems to support the story of soldiers deals on the front. Neither side wanted to die and both sides saw the futility of war in the trenches. Unofficial arrangements were made to fire over the heads of the opposing side. The idea was to fool the officers into thinking the fighting was real while not risking their lives. One interesting weapon that Young writes about is the trench mortar. Mortars are portable indirect fire weapons that shoot shells in an arced trajectory. The trench mortars fired at a shorter range but higher altitude. The idea was to fire at the enemy trench a hundred or so meters away. The altitude the shell reached allowed it to fall almost vertically into the enemy’s trench effectively negating its defensive advantage.

Walter’s War gives the reader a first-hand look at the war from an enlisted man’s point of view. Young does not seem to be overly patriotic, but a man who believes it was his duty to serve. His memoir is not all blood and killing. He tells of the down time and life outside the trenches. This is a very human look at a war that shocked mankind. It was the war that ended the idea of the glories of war and the blind willingness to fight for a cause that did not directly affect most of the participants. Young gives the reader a very personal look at the war.