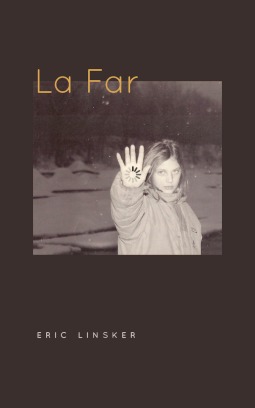 La Far by Eric Linsker is a collection of poems that won the Iowa Poetry Prize in 2014.Linsker is a graduate of Harvard College, where he received the Academy of American Poets Prize. His poems have appeared or will appear in American Letters & Commentary, Colorado Review, Conjunctions, Denver Quarterly, nth position, Parcel, and other journals. He earned MFA in poetry at the University of Iowa Writers’ Workshop and has received the John Logan Poetry Prize. He is an adjunct professor of English who has taught at Baruch College, Queens College and the N.Y.C. College of Technology.

I received this collection last year from the University of Iowa Press to review. As the deadline drew near, I had to write back and admit that I could not finish this collection. Much to my surprise, they were very understanding. I tried several times and although I could pick up bits and pieces, most of it went right by me. So a year later, I finally read through it and have some confidence in my understanding of it although a good deal simply did process in my mind.

I could see what he was doing with the lines. Verbally the words did not seem to fit the line structure and punctuation. I got plenty of the water theme throughout the book and certain lines did jump up and grab me.

This reminded me of the holographic principle in string theory. And as weird as new science can be Linsker’s poems are not too far behind. There seems to be quite a bit of “noise” surrounding the pieces that I can grasp. Once I viewed the work as sort of a word maze, it became easier and I enjoyed it. It was not the simple enjoyment of Blake or Wordsworth, but the enjoyment you get after solving a complex calculus. The work is not that much fun, but the discovery makes it worthwhile.

I could be completely wrong with what I came to understand in my reading. I tried to look at other reviews to see if I was on the right track, but Goodreads gave only star ratings and Amazon had mostly one star reviews, but from those comments it seems pretty clear they were not written by poetry readers. So I will go out on a limb and post my thoughts.

Intriguing and difficult at times La Far seem to be the poetic equivalent to panning for gold. There is a great deal of work sifting through the words to find the bits of gold. This is a collection that I will read several more times and will probably gain more from each reading.