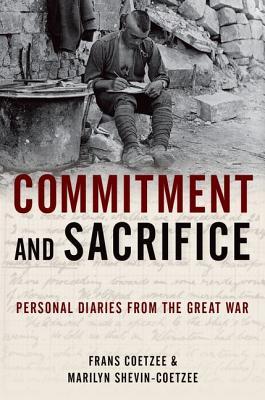 Commitment and Sacrifice: Personal Diaries from the Great War edited and notated by Frans Coetzee, Marilyn Shevin-Coetzee is a collection of six diaries from six very different people involved in the fighting of the first world war. The Coetzees are independent scholars; they have previously taught at Yale and George Washington Universities. Marilyn is the author of The German Army League: Popular Nationalism in Wilhelmine Germany and Frans the author ofFor Party or Country: Nationalism and the Dilemmas of Popular Conservatism in Edwardian England. Together, they have co-edited Authority, Identity and the Social History of the Great War; World War I and European Society: A Sourcebook; World War I: A History in Documents; and The World in Flames:A World War II Sourcebook.

Last year was the 100th anniversary of the start of WWI and many books on the subject were published. Some were very good at offering insight to areas not usually covered in general history. Books concentrating on the Eastern front were published. At least one book on Gallipoli and the Mandate System found their way into my hands. Different views of the war were presented with some placing the blame squarely on Germany while others examining the entire diplomatic/military failure. Books were published on the diplomacy leading up to the war and the compulsion for the people to readily enter into war after fifty years of peace and growing prosperity. Commitment and Sacrifice examines the war through first hand accounts of those involved directly and indirectly in the fighting.

Usually, first-hand accounts are used to show the horror and senselessness of the fighting and the horrid conditions in the trenches. Here six individuals are chosen and their diaries published. The diaries are notated with historical references, explanations of slang and foreign words, and corrections of misused foreign words, places, and people. Before each diary account is a short biography of the writer and his wartime environment. Rather than the diaries of six infantrymen on the French lines the people chosen are from a variety of nations and stationed at different locations.

The book opens with Englishman John French, a sapper, and his account of the war. It is very British — straightforward and to the point. French documents well but without emotion. Philip Cate an American ambulance volunteer relates his experiences. He writes with great detail and interest. Perhaps not being shot at in the trenches gave him more time and a better outlook on the war. Willy Wolff, was a German living in England at the outbreak of the war and found himself like other German nationals in an internment camp. I did not, before, realize the extent of the internment camps in England. Not only were the camps filled with Germans, a sizeable percentage of them were Jews. James D Hutchison was a New Zealander, part of the ANZAC forces, who served as an artilleryman at Gallipoli. He would later return as an officer on the western front. Henri Desagneaux was a french infantry officer on the front. He was a soldier’s soldier. From his writing, his disdain for the higher ranking officers who only came to the forward areas to inspect and criticize the troops is clear. Finally, Felix Kaufmann, a German prisoner of war, records his story of life as a prisoner in France.

These men came from different places, held different positions, and supported different sides in the war. Much like the fable of the blind men and the elephant, the different experiences give a complete picture of the war. Like the modern military two things were important to the diarists — letters from home and food. The diaries provide a unique view of the war. Unlike letters home about the war which were censored and written so loved ones would not worry about their safety, these were personal observations that were meant to be kept private filled with real feelings and observations. This is the war as experienced by the participants who wrote what they experienced with no ulterior motives unlike newspapers or novelists which tend to sensationalize.Commitment and Sacrifice provides a rare look at the war through the private thoughts of those involved.