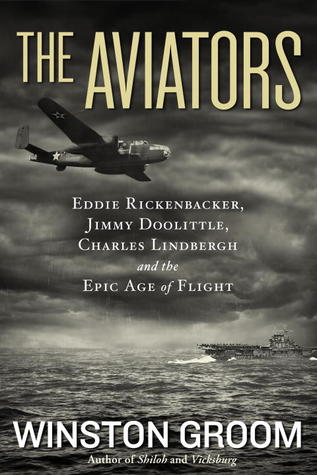 The Aviators: Eddie Rickenbacker, Jimmy Doolittle, Charles Lindbergh, and the Epic Age of Flight by Winston Groom is the intertwining stories of three of the greatest aviators in America and for that matter the world. Groom is an American novelist and non-fiction writer, best known for his book Forrest Gump, which was adapted into a film in 1994. He served in the Army from 1965 to 1969, including a tour in Vietnam. Groom devotes his time to writing history books about American wars.

This is another audiobook edition I have listened to over the last week. These are my thoughts and opinions in the audiobook and not a critical review because I am missing the bibliographical information and a list of source material used by the author.

If asked about these men before listening to the book I would have given fairly simple histories. Rickenbacker: Ohio native, Ace of Aces, and Hat in the Ring. Doolittle: Raid on Tokyo. Lindberg: Spirit of St. Louis, kidnapping, rumored Nazi sympathizer. The Aviators goes much deeper into their personal lives and histories. I never knew Doolittle made the first instrument only flight or Rickenbacker ironically sold Fokker planes after the war. I really surprised that Lindbergh flew unofficially with the Marines in the Pacific during WWII. He was a civilian advisor that volunteered to fly combat missions to “test” the handling of the planes. When told that as a civilian that if he was captured the Japanese would execute him. Lindbergh said he heard the Japanese would do that even if he was in uniform.

The stories of the lives of these men intertwine they had their ups and downs and political friction about the military and America’s aviation program. They were all famous in their own way, but Lindbergh was “The Beatles” of American aviation. I remember the moon landing and the celebration that entailed, but it was nothing compared to Lindbergh’s popularity and worldwide fame. Even after his “fall” people still respected him for his accomplishments, if not his opinions.

The men’s personal and business lives add depth to the story and all the men stayed involved in the aircraft business throughout their lives. They clashed with businesses and the military hierarchy. They put their lives at risk for the good of the nation even when they disagreed with the politics. Rickenbacker spent twenty-four days adrift in the Pacific when the plane he was on ditched into the ocean; he was on a tour of the Pacific visiting airbases. The men’s lives outside of what made them famous are just as exciting as their high points. Not one of them rested after becoming famous. Their stories are an inspiration to all.