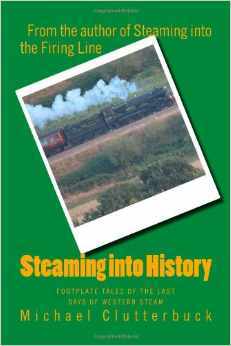 Steaming into History: Footplate History of the Last Days of Western Steam by Michael Clutterbuck is the sequel to Steaming into the Firing Line. Both are historical fiction novels on the final years of steam powered engines in Britain.

Although this book stands well alone, it does pick up the story of Driver George Denton and Fireman Lance Hargreaves. The first book takes the reader through World War II and Lance’s early experiences. Steaming into History covers the years from 1946 through 1965. George is retiring and had done his best to pass all he knew to Lance. There is a definite father-son relationship between the two. George does his best to “raise” Lance to be a driver (engineer) which is quite a task. Lance is a little more than rough around the edges and faces several challenges in growing up.

Each story can stand by itself but collectively they cover a twenty-year history. What I like about the stories on an individual level is there seems to be a moral or lesson to be learned from each one. Whether it’s safety, life lessons, or doing a good deed, there is something deeper than the fall of the steam engine era. The writing, like the first book, seems to be from a different era. The reader will feel drawn into an almost black and white era with the arrival of the diesel engines as the color era. There is a historical feeling to the book and a feeling of change. Not only is the change in engine types but society.

One theme driving the change was the nationalization of the railroads in 1948. Nationalization was part of the downfall of the system. Unprofitable lines were shut down almost immediately, still by the mid-1950s the railroads were heavily in debt. A new plan was drawn up in 1955 to totally replace all steam engines with diesels, modern marshaling yards, and new freight and passenger cars. This where Lance finds himself and his career.

Lance becomes the main character in the book. This is the generation that a driver is being moved by a system to replace his beloved steam engines with diesels. Lance becomes a driver and experiences training his fireman and learning to be responsible on the job, and in life. New responsibilities challenge Lance’s old ways.

I can’t seem to get enough good train books. Although Clutterbuck says in the introduction this is the end of the line, maybe we can hear more about George’s days before World War II. Trains have had a long and proud history in most of the world. Some countries have modernized others like America have stagnated. Trains helped build the modern world, kept the industrialized world moving, and in many places now keep people moving more efficiently than automobiles. Although the steam era closed on George and Lance, modernization can bring a new era of love for trains. Read Steaming into History, visit and ride an historic train, and you will wonder how we let this era pass. Thank you for helping us remember.