Book Review — Genghis Khan: His Conquests, His Empire, His Legacy 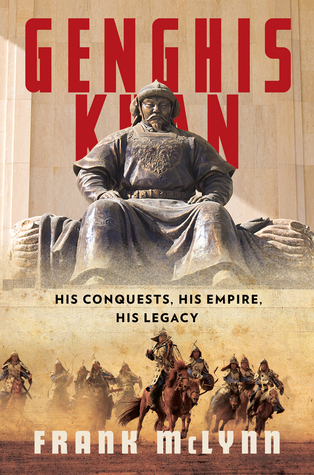 Genghis Khan: His Conquests, His Empire, His Legacy by Frank McLynn is a detailed history of Asia’s most famous ruler. McLynn is a British author, biographer, historian and journalist. He is noted for critically acclaimed biographies of Napoleon Bonaparte, Robert Louis Stevenson, Carl Jung, Richard Francis Burton and Henry Morton Stanley. He was Alistair Horne Research Fellow at St Antony’s College, Oxford (1987–88) and was visiting professor in the Department of Literature at the University of Strathclyde (1996–2001) and professorial fellow at Goldsmiths College London (2000–2002) before becoming a full-time writer

There is hardly a person who has not heard the name Genghis Khan. The Mongols have been a namesake to rock bands and biker gangs. They both invoke powerful images of violence, discipline, empire, and military conquest. He was a man that lived eight hundred years ago but has one of the most detailed histories of the period. This is the second biography and history of the Mongols I have read and at 704 pages, it was much shorter than the other biography I read. There is certainly not a lack of information on Genghis Khan.

Like Ivan IV of Russia and Machiavelli, their negative information in common culture far exceeds any positive information. The truth of the matter is different. Although the Mongols under Genghis Khan were responsible for many massacres, they had rules. For example, they highly valued diplomatic emissaries and to kill one was a great insult. They openly accepted and valued new religions in their lands. However, the killing of all the residents of the city over ten years old, except for select artisans and harem women is true. Genghis Khan did deploy a “surrender or die” ultimatum to cities. Those that did not surrender were destroyed. Those that did surrender and came to a tribute agreement were left alone. Gaining land without losing warriors was always preferred. Trade became important too with the agreement with the Venetians and bringing the Silk Road under Mongol control.

Genghis Khan cover the life of Temujin from his birth to his rise to Khan of all Khans. The road was not easy it is a story of alliances, friendships, and conquests in small steps. It is also a story of creating a society under laws and codes and balancing that with dictatorial rule. One of his first tasks as Khan was to set up a civil government and military. Genghis Khan used meritocracy to fill in the ranks. It was not uncommon for shepherds to become military leaders based on experience. Many rules of the society were practical for people living on the steppes. Rules around running water were interesting in what was considered polluting it. Water had an almost supernatural quality to it for the people of the steppes. A wide variety of “crimes” carried the death penalty on the steppes including polluting running water, slaughtering animals in an improper way, assisting an escaped slave, adultery, and horse thievery.

The author offers some interesting information on the way the westward expansion stopped. Having conquered the east to the Pacific Ocean, the westward expansion stopped in Europe. There are many theories discussed in the book on why the Mongols did not continue, but one strikes me as the most interesting. The Mongols were practical people. They lived and conquered on the steppes, it was their universe. The forests of Europe to them would be considered a wasteland to them. The land was not useful to their way of life and they saw no reason to fight for it. That, however, is only one of many theories.

McLynn gives a very detailed, but very readable history of Genghis Khan and the Mongol Empire. The book contains information on troops, captured, treasures, military tactics, and information that seems to come from government records on the numbers of animals, economic, and even environmental information. The history cover Temujin life and the empire through Kublai Khan and the final conquest of China. Very well worth the read for the historical insight and an understanding of the people.