Book Review — The Tail Wags the Dog: International Politics and the Middle East 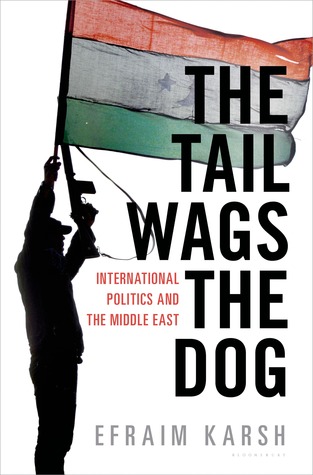 The Tail Wags the Dog: International Politics and the Middle East by Efraim Karsh is a history of the Arab world since the fall of the Ottoman Empire. Karash is founding director and emeritus professor of Middle East and Mediterranean Studies at King’s College London. Since 2013, he serves as professor of Political Studies at Bar-Ilan University (where he is also a senior research associate at the Begin-Sadat Center for Strategic Studies). Furthermore, he is a principal research fellow (and former director) of the Middle East Forum, a Philadelphia-based think tank. He is regarded as a vocal critic of the New Historians, a group of Israeli scholars who have questioned the conventional history of the Arab-Israeli conflict.

Karsh opens with an interesting premise that would have made the world, or at least the Middle East, a different place entirely. No doubt the Ottoman Empire was, as Nicholas I described, the sick old man of Europe but its role was pivotal in the modern Middle East. The Ottoman Empire was under no pressure to join in World War I. France and England both made promises to the empire that they would not attack. The Ottoman Empire like France and England were all leaders of empires. This created a bond between the three. The Ottomans, however, chose to join the Germans which lead to its defeat and loss of its empire. German and Ottoman lands were put under mandate and divided up between England and France. The competition for power in the region lead to various Arab leaders and internal rivalries. Had the Ottomans stayed out of the war granted, some regional autonomy, things may have been very different. There was no Arab sense of nationalism region, that idea was created by the mandate system.

The Tail Wags the Dog: International Politics and the Middle East history up until recent events including the rise of the IS and the failure of the Arab Spring. He does make note of the United States’ pride Israel being the achievement of a liberal democracy in the Middle East and likewise notes that it was the US that installed the Shah’s totalitarian regime. Soviet intervention into the region is discussed in the form of aid and influence to the invasion of Afghanistan to create a buffer from radical Islam. Although the world powers played a role, Karsh claims the driving force was and is the Arabs themselves.

The Middle East Peace Treaty between Israel and Egypt is examined. Seen as a great event by the US it happened only months before the fall of the Shah and just over a year before the attack and hostage crisis in Iran and the Soviet invasion of Afghanistan. The idea of peace was quickly overshadowed. The most telling event of the peace process was the exclusion of any Palestinian representation in the Camp David Summit. The US did not directly deal with the Palestinians until the Clinton presidency. Perhaps that is the key point to understanding the Middle East is that it is not about national identity. The problems in the Middle East are usually not between nations and national identities, with Iraq being the modern exception. It is contained in the Arab identity. Egypt wanted to unite the Arab world under the United Arab Republic and failed. IS, the Muslim Brotherhood, and others are Pan-Arab are movements do not recognize international borders. Their aim is to unite all Arabs and Islam. Again even entering into the present with the concept of Western nationalism is not a factor.

The Tail Wags the Dog: International Politics and the Middle East provides a history by a controversial author and historian. The writing is well documented and appears to use a great deal of source material. The history is very detailed and reads much like a graduate level textbook. There is certainly new information or at least new thinking of the complex history of the Middle East. I would be surprised if Karsh does not receive some criticism from the established academia. His work does appear to be factual, but like all histories there will be an interpretation of actions and motives. Personally, I gathered a great deal of information on the subject and perhaps new thinking on some subjects. History needs to be examined and reexamined to keep it honest. Controversy keeps history alive and intentionally or not this is what Karsh is facilitating.

One response to “Book Review — The Tail Wags the Dog: International Politics and the Middle East”