<i>For kids born in the late 1950s and beyond, who felt they had been robbed of the American Dream and abandoned by the people who last went to the culture barricades, Fresh Fruit actually offered hope.</i> 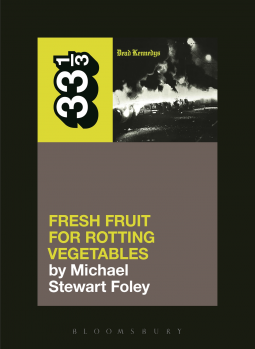 My first encounter with the Dead Kennedys was in a pulp rock magazine, probably Creem. It wasn’t a positive reaction. The band’s name was a turn off for someone born after the Kennedy assassination. It was years later when I finally listened to the band. Cleveland’s WMMS was a world class rock station and I heard many new bands before most of the country did, but I never heard the Dead Kennedys. It years later when I was in the Marines in California that I first “Holiday in Cambodia” and became a fan.

Bloomsbury Academic has put out many these books covering a specific album of a band: Patti Smith’s Horses, Meat is Murder, The Velvet Underground and Nico, Born in the USA and one hundred others. The books give an introduction to the band and the historical setting at the time. It is more than a book just about the album, rather the album is the central point of the book. Jello Biafra (Eric Reed Boucher) had a vision of music much like Patti Smith. He saw Rock and Roll as selling out. Corporate and Arena Rock crushed the spirit of Rock and Roll.

Biafra, from Colorado, moved to San Francisco and eventually met with East Bay Ray and Klaus Floride. The name was Biafra’s idea and was rejected by the band for some time before being accepted. The band’s hardcore sound and biting political lyrics made them famous. In what many would see as a liberal haven, the Dead Kennedys viewed something entirely different. Many saw Jerry Brown and Diane Feinstein as patron saints to the far left; the Dead Kennedy’s and Biafra, who wrote nearly all the lyrics, saw things very differently. In “California Uber Alles,” Biafra records Jerry Brown as saying:

“Lynch the Landlord” was rage against the price gouging landlords, including mayor Diane Feinstein.

The Dead Kennedys also used their own sense of humor and sensationalism to get their message out. Biafra ran for mayor against Feinstein. There was humor and political attacks, and although Biafra only won 4% of the vote, that number far exceeded the number of punk rockers in the city.

Perhaps their most over the top, and honest, “prank” occurred at the 1980 Bay Area Music Awards where the Dead Kennedys performed, supposedly to give them mainstream credibility. The band stopped their performance of “California Uber Alles” to announce they are not a “punk band” but a “new wave band” and tear into the commercial corruption of punk into new wave music. They mock The Knack’s “My Sharona” by playing “My Payola” complete with a “boring” guitar solo. If there was any possible doubt the Dead Kennedys were anti-establishment, it was completely removed by this single act. The song would later appear as “Pull My Strings” on the albumGive Me Convenience or Give Me Death.

Dead Kennedys’ Fresh Fruit for Rotting Vegetables is a look at the late 1970s San Francisco and exposes what many at the time did not notice — the hypocrisy of the political left. The Dead Kennedys were more than just a protest or political band. They used humor and wanted to show people that standing up against the establishment was not only worthwhile, it was fun. Well worth the read for those in the 50 plus crowd who want to remember and for the younger crowd to see that their parents might not be the conformists you think they are.

Walt Whitman is probably best known for the great work of American poetry, Leaves of Grass. However, his early published writing came from his work as a journalist for local New York newspapers. From these writings, Whitman’s political views and his writing style are clearly illustrated. The University of Iowa Press has put together an impressive collection of Whitman’s early writing.

Whitman’s views tend to be complex rather than simple. One the issue of slavery, Whitman opposed the spread of slavery but spoke out against the abolitionists. He did, however, support the Wilmont Proviso, preventing the spread of slavery into new territories. In an interesting article, Whitman supports Oregon’s constitutional provision preventing blacks from settling in the state. He reasons that since blacks will never be seen as equals and will never maintain the rights of white, perhaps it was better that they were not in Oregon to begin with. Whitman sided with the Free Soil Movement, a political party who believed that labor by free men was morally superior to slave labor.

Whitman also writes on a variety of issues from the 1840s through the 1860s. He takes sides in the Mexican American War with enthusiasm. He discusses the 1860 Presidential Election and the effects of the splintering of the Democratic Party. Whitman speaks well of Long Island and agrees with the ideas of others that Long Island could be its own state of its own. He also writes of local New York issues and politics. His writing covers a wide range of issues and topics.

In today’s newscasts, where currently two major news hosts are under fire for the inaccuracy of their reporting, sensationalism is the lead story. Twenty years ago Dateline NBC rigged a GM vehicle to explode to prove a claim of a faulty gas tank. Before then the standard theme was “If it bleeds, it leads.” The News is a business and does what it needs to to gain readers/viewers. In a far distant past, when there were as many newspapers in a city as churches, there was a many reporters, and many ways to make your mark and become successful. Whitman’s writing is what sets him apart. His use of words and style supersede the substance of the article. The reader feels compelled to read the article even if he or she does not agree with the subject.

Each news article is cited with detailed information. The source of the article and most importantly historical notes related to the article. People mentioned and even historically obscure events are detailed to allow the reader to put the article into historical context.

Walt Whitman’s Selected Journalism is an interesting look at the early prose writing of a great poet and a look at the reported news in the United States. The history is what the average person would have read in the newspaper, however, the writer is far from average. This is an impressive collection of historical viewpoints by a great American writer.