Book Review — Through the Eyes of My Mind: A Collection of Poems

The sun so long above the mountain
Leaving behind its vanishing glory is now stooping low, about to set
My fluttering footsteps,
Not far away,
Will faithfully follow them all.
Fading Flowers 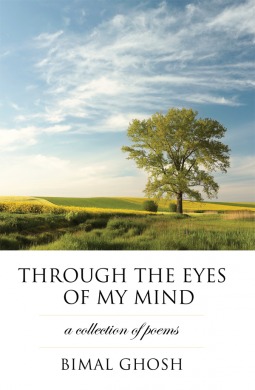 Poetry comes from all people and all places, or so I have been told. To me, poets are those living, seeing, and thinking on a level slightly above the rest of the rational thinkers. I am at a loss to name a poet that did not belong to that lyrical class of writers or singers. It’s true that there are poems on about every subject written by enthusiasts –cyclists, sport fishers, even particle physicists — and though sometimes clever they are usually pretty bad or cutesy, as an art teacher once described it. There are brilliant writers on a variety of subjects and their brains seemed to be honed to their subject matter. I read my friend’s dissertation on molecular biology which was an amazing piece of work, however, I would never ask her to write a poem. Despite all my reviewing of poetry, if I tried writing it, I would probably make a Vogon* cringe.

This brings me to Bimal Ghosh, the poet responsible forThrough the Eyes of My Mind: A Collection of Poems. At the beginning of the book, there is a list of previous publications by Ghosh they include nearly a dozen books on human rights and migration. Reading further into his biography one will find that: He worked as the director of a UN/IOM global project on migration management: New International Regime for Orderly Movements of People (NIROMP); as a senior consultant to the United Nations and IOM; and as an external collaborator/ adviser to the Commission on Global Governance, the Council of Europe, Global Commission on International Migration and the German Technical Co-operation Agency, on migration, development and human security issues. Clearly not the resume of a typical poet.

His work surprised me. Although some of the collection deals with real world problems and real world people like Nelson Mandela, it, for the most part, is separate from Ghosh’s field of work. It was refreshing to see references to Jean-Jacques Rousseau and even Thomas Hobbes. He makes references to other writers like Wordsworth and Whitman, and when Ghosh is influenced by a historical figure he notes that too. The poems are are listed with a date and places where they were written or spoken. Some of the poems have an explanation to go with the poem or notation on how a verse he wrote was borrowed or modified from a historical writer or figure. Some of the notes are more personal like the poem to his daughter for her birthday when they were separated.

For me, as the reader, the first two sections of poems were by far the most appealing. The subjects are aging and death, but it did not seem morbid. There is the moving into old age, the twilight of life, where we wonder what it is all about and why time seems to move faster as we age. What happened to all we planned on doing with our lives?

The dreams of my youthful days of those better tomorrows, of a brave, new world,
where have they gone?
Where?
The Lost Dreams

But who will tell me what happens when our deeds remain half-finished, acts wait in store, never done, and the time is up and the hour gone?
Farewell to Earth

Ghosh puts together an interesting collection that covers a variety of subjects and themes. There is reflection, questioning, a touching ritual of cheating death in “The Last Round.” “Miles We Walked” reflects on our failure as mankind to each other and to the earth. The section “Glimpses of the Beauty of Change” near the end of the collection takes the reader to more uplifting poetry that compliments the edge of the early sections. A very well rounded selection of poetry from an unexpected source, written in an easy and comforting language

3 responses to “Book Review — Through the Eyes of My Mind: A Collection of Poems”