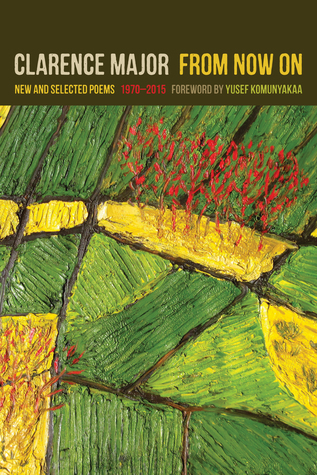 From Now On: New and Selected Poems, 1970-2015 by Clarence Major is a collection of the poet’s work over the last four decades. Major has traveled extensively and lived in various parts of the United States and for extended periods in France and Italy. He has lectured and read his work in dozens of US universities as well as in England, France, Liberia, West Germany, Ghana, and Italy. Clarence Major is also currently a professor of twentieth-century American literature at the University of California at Davis.

One of the great things about poetry collections is that even if some, or many, of the poems do not strike your fancy, it is still worthwhile reading. Collections, too, offer the reader a variety over decades of work. If one period of the poet’s work doesn’t appeal to the reader another period likely will. With this collection, I immediately latched on to the poem “Air.” It is eleven lines of unstructured poetry without a single item of punctuation. The only capital letter is at the start of the poem. It is up to the reader to find the rhythm the poem by the words alone. The early works carry a refreshing beat.

Towards the middle of the collection, Major moves to detailed conversational poems. They are prose poetry with very detailed observations. Major describes places he has been, historical events, and people. The rhythm gives way to building a picture with words. There is a deep connection with the subject, but not the structure of traditional poetry. However, the detail is meticulous. It is not my style of poetry, but I can see the quality of the writing.

Near the end of the collection, I find myself enjoying the poems as I did in the beginning. “From Parking Lots” (1992) is a rather long free form poem about America that hit home for me. Various cultures and America’s automobile-centric style of life is portrayed in a cross country view, from Philadelphia to San Diego, tinged with murder. It read to me, much like a rambling Kerouac work. It also brought to mind an unlikely comparison of Jim Morrison’s view of America and California. This is probably my favorite of the material presented perhaps because of the reminders of my travels and the writer and a musician decades before. Another long poem but of a different tone is “The Slave trade: View from the Middle Passage” is told by Mfu, who was sold into slavery by his chief for a shaving brush.

The collection closes with his most recent works. Nearing his eighth decade, the poet seem to be more reflective and more personal. The style has matured and has the feeling of good poetry. This is the type of poetry that one would expect from an accomplished poet. Although sections of this collection are not my idea of poetry, I do recognize and appreciate the work and skill presented in the works. That is the wonderful thing about poetry. We, the readers, can pick and chose what we like and what we read. Unlike a novel, we are not at a loss for picking and choosing.