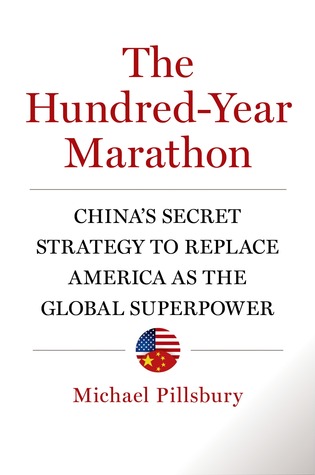 The Hundred-Year Marathon: China’s Secret Strategy to Replace America as the Global Superpower by Michael Pillsbury is a re-examination of the US-Chinese relationship over the four decades. Pillsbury earned his BA from Stanford and his PhD from Columbia University. He has been an influence on US policy for several presidential administrations.

“The enemy of my enemy is my friend” is a very old maxim and is generally thought to be true. However, in dealing with China this is probably far from the truth. China once held a position of power and prestige and its current goal is to return to that position. When countries decide to “take their rightful place” in the world it is done with saber rattling and demagoguery. It is usually thought to be someone like Hitler, Quadafi, Hussein, or the Jungs and the combination of emotional pleas and military buildups. China behaves differently.

China through the 19th and 20th century has been victimized by outsiders. The British with the Opium Wars. Europe and America in the time leading to the Boxer Rebellion. Japan in World War II. China plays off these events to strengthen its position while bargaining, particularly with the US. We saw China as an ally against the Soviet Union. China saw the US as someone who would give military technology, relieve them of defending their border with the USSR, and provide naval security in the shipping lanes. China also hoped that the US and USSR would deplete themselves in the Cold War leaving it as the main power.

China is also different in its political thinking. It does not expect rapid change, and it is prepared to wait as long as it takes. The idea of a hundred year marathon is that China will replace the United States by the 100th anniversary of Mao’s rise to power. Slow rise to power eliminates the usual threats to the outside neighbors. In keeping with Sun Tzu’s “If you wait by the river long enough, the bodies of your enemies will float by.” time is not an enemy to the Chinese.

In graduate school, we learned that a superpower needs three things: Political Power, Economic Power, and Military Power. The United States takes military power seriously. It continues to advance in power and technology. This path costs a fortune as evidenced by the growing national debt. China, however, has a story about the “Assassin’s Mace.” The mace is small and insignificant looking but in the hands of someone who knows how to use it, it is deadly. Rather than build a large blue water navy to project power, China’s power comes from a different source. As impressive as the high-tech military of the United States is, it has a definite weakness. China is set to exploit that weakness. It has already demonstrated its ability to destroy satellites in orbit and is working on technology to spy on spy satellites. Rather than building large expensive weapons, China’s “assassin’s mace” is much cheaper than the weapons it destroys. Anti-ship weapons are cheaper than aircraft carriers. It is cheaper to hack into a computer system than design one. China’s military concentrates on the small cracks in its enemy’s impressive armor.

China is a growing economic power, there is little doubt of its manufacturing base and rising living standards. Western nations gained wealth by colonizing and or outright taking of land. China plays a much softer role gaining political and economic power. It supports America’s enemies, even in Afghanistan after 9/11. It allows restricted technology to trickle out to aggressive countries. China knows it needs resources to grow and has turned to Africa for many resources in what seems to be reverse colonization. To secure resources, China invests heavily in African nation’s infrastructure in return for access to strategic materials. The process is building bridges between nations instead of creating conflict.

Inside China things are complex. There are hawks and doves in the government, and it seems the hawks are the doers and the doves are the one’s America hears. America has been very accommodating to China since the Nixon visit from technology to Most Favored Nation Status and viewed China as an end in itself. China sees America merely as a means to an end. Pillsbury gives an insider’s look at four decades of misinterpreting China and it goals. We assume all countries live by the western code of Just War and think in the same terms as those in the West. China is different. It is waiting and watching until our own misinterpretations become too great to turn back on. We thought the war over planned and open economies was over with the fall of the Soviet Union, but it is not. China was on the sidelines cheering the US on and watching it weaken with a mocking smile.