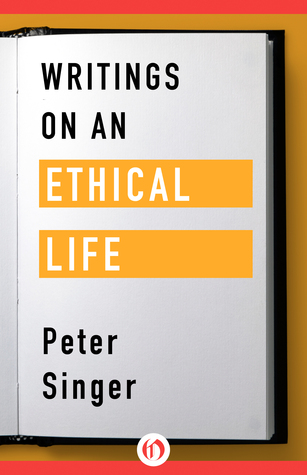 Writings on an Ethical Life by Peter Singer is a collection of essays examining ethics. Singer is an Australian moral philosopher. He is currently the Ira W. DeCamp Professor of Bioethics at Princeton University and a Laureate Professor at the Centre for Applied Philosophy and Public Ethics at the University of Melbourne. He specializes in applied ethics and approaches ethical issues from a secular, utilitarian perspective. Singer is well known in the Animal Rights community. He is to animal rights what Richard Dawkins is to evolution and atheism, but seemingly kinder and less bellicose. I was expecting a re-hash of Animal Liberation, and there are portions of that book in this collection, but I received a much more human to human ethics lesson.

Many of the essays examine ethics with the use of thought experiments. The idea that we can easily recognize something as being wrong, yet fail to see the same thing in our everyday lives. Utilitarianism is looked at and examined from different angles as well. Social issues like abortion, wealth distribution, starving children, and animal rights are all examined.

Since it is a collection of essays, the topics cover a wide range of subjects under the general umbrella of ethics. The definition of ethics itself is discussed and compared. The search for a one size fits all code of ethics is discussed as well as the roots of Western (Christian) ethics, which has itself evolved over time. Utilitarianism is discussed as the once possible standard. As much as the idea of providing the greatest happiness to the greatest number of people sounds good on the surface, it has a darker side. Typical thought experiments deal with the idea of killing some people so that a majority can survive — a few suffer (die) so the majority can live would fall into the realms of utilitarianism. Take it a step further into a real world example. China’s one-child policy as a method to control population and allow for enough resources for the population was considered barbaric by some because it leads to abortion (another ethical question) and infanticide. To borrow a pop-culture phrase, “Do the needs of the many outweigh the needs of the few? ”

As much as we like to think there is a clear and well-defined ethical code we often miss what is in front of us. Singer uses an example of a man who buys a rare car as a retirement investment. He can’t insure it and plans to sell it to cover his retirement cost. He drives it occasionally and one day he is out and a situation develops where he has a choice of saving his car or saving a child on some railroad tracks, but not both. He chooses to save his car. Of course, this is meant for the reader to show outrage at the actions of the man. How could anyone choose to save an item over a human life? It seems to be a very clear-cut case of the man acting unethically, yet we do the same thing every day. We may not watch the child die, but we know there are children dying of exposure while we buy new clothes. New clothes not because we need them, but because ours no longer in style. The same can be said about the new car, new electronics, new phone that we want and do not need, especially when that money can be used to feed the starving. Does that make us as guilty as the man who saved his car?

We see, experience, and even support activities that are ethically hypocritical. Say on the issue of abortion we oppose abortion because the fetus is a child and it is innocent of any wrongdoing that could possibly justify its death. It is an ethical position, but not the only one. But, on the other hand, we oppose programs like WIC, medical care, headstart, and other programs that cost money because now that innocent child shouldn’t be a burden on others.

Some of the examples above were mine based on Singer’s examples, but they all seem to share one common feature. Individual ethics in today’s world seem heavily dependent on personal cost and discomfort. It is easy to be ethical when it does not cost you anything. But if it cuts into your earning through taxes or takes away luxury you believe you deserve, it is suddenly a new issue and a different set of reasoning. This collection of essays, if they do nothing else, will make the reader think and hopefully think in a different way. More than a collection that was made to simply agree or disagree with, this collection will inspire debate on the topic of ethics, which is what is needed.

2 responses to “Book Review — Writings on an Ethical Life”