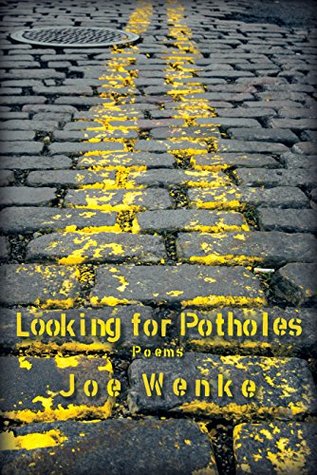 Looking for Potholes: Poems by Joe Wenke is his second collection of published poetry. Wenke, an outspoken and articulate LGBT rights activist, is the owner and managing partner of Xperience with a focus on LBGT rights and promoting freedom and equality for all people. Wenke received his M.A. in English from Pennsylvania State University and a Ph.D. in English from the University of Connecticut.

I first read Wenke last year when I received a copy of Papal Bull: An Ex-Catholic Calls Out the Catholic Church. I like his writing and as a former Catholic I liked the message too. I was thrilled when I received a copy of Looking for Potholes. The first poem, “I don’t Have to Be Right,” right me right from the start. It just happened the day I picked up this book was the anniversary of a close friend’s suicide and the poem certainly hit what I was feeling. “Withdrawl” gives a look into an introvert’s world. In “Swerve” I first noticed a move to what I could only think of as Dr. Seuss type rhyming:

I move through the dark,
doing the math,
taking the path
of least resistance,
knowing the odds,
ignoring the gods,

At first this rhyming seemed a bit on the “cutesy” side of poetry. The more I read, however, it did carry a deeper message and the rhymes created interest or pattern like the beat in a song. Some poems reflect on other people and society. It is not always in a positive light. At times, Wenke lets loose at others in a way we wish we could in life. He turns inward too. “Trapped” and “Some Place” look inside individual feelings, fears, and emotions.

Dear Devil,
please make me thinner,
If you do,
I promise to become a better sinner.
I’m pretty bad already,
but I know I can do better.

Looking for Potholes is a short collection of poetry. It was not what I was expecting after reading some of Wenke’s other books. I enjoyed and appreciated this collection more than his other works also. Instead of “attacking” religion, which usually brings grief to the reviewer too, he looks at human nature and the human experience. Wenke looks at the part of being human that is not usually written about. It is not all flowers and rainbows in the real world. People have problems. People have faults. The simple lines and simple rhymes help bring these thoughts to the forefront. Wenke uses simple methods to bring up complex issues. What I took as a bit childish early on turned out to be quite a bit deeper than my initial thoughts. Very well done and cleverly done.