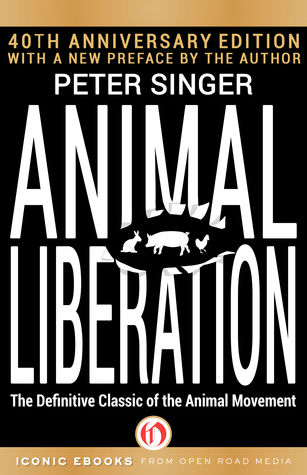 Animal Liberation is the book that started the modern animal rights movement. Peter Singer, the author, is an Australian philosopher. He is the Ira W. DeCamp Professor of Bioethics at Princeton University, and laureate professor at the Centre for Applied Philosophy and Public Ethics (CAPPE), University of Melbourne. He specializes in applied ethics, approaching ethical issues from a secular preference utilitarian perspective.

In 1975, the first edition of Animal Liberation was published. It has become the centerpiece of the movement. The book was revised in 1990 and again this year for the 40th anniversary. The philosophy does not change, but the material is updated for the current time. For example, Revlon is no longer testing beauty products on animals and factory farming grown at an incredible pace.

Singer uses reason and sound arguments to make his points. He does not make emotional appeals. His writing on speciesism reminded me of a news story here in Texas a few years ago. There was a news story with a crying teenage girl. She had sold here horse only to find out that it was bought by a slaughterhouse. She thought it wasn’t right, even though she sold the horse as one would sell a piece of property. She thought the horse she sold was going to a good home and felt betrayed. The story made me wonder if she felt the same way when she ate a hamburger. What is the difference between mammals? Why is there no problem in the slaughtering millions of cattle or pigs, but there is a problem slaughtering horses or dogs. Also, why are dogs and cats protected from abuse but cattle, sheep, swine, and birds are not?

Singer, however, does not devote the largest part of his book to what we eat, but how we treat animals and the reasons why. He also points out the hypocrisy in the way we think about animals like I pointed out above. People oppose wearing fur, but at the same time see no problem with leather. We say we love animals –kittens and puppies — while eating a ham sandwich.

Singer also looks at Western civilization and the reasons we think about animals the way we do. From the Book of Genesis, though Greek thinkers, Roman society, and philosophers in the Age of Reason, the present Western mindset of animal rights or more appropriately the lack of rights is set. We have made progress from Roman times, but it is slow and suffers many setbacks.

Some of this is how we are raised. Today we are so separated from our food many do not associate it with its source. I remember real butcher shops where men still cut your meat from sides of beef right in front of you. Today meat comes in white styrofoam packaging with pads underneath to absorb any excess blood. Blood might remind a customer of the process. We tend to forget or ignore how the meat gets into the neat packaging. We think of “happy cows” on a farm, not feed lots. We think of farmers hand milking cows and animals living long happy lives grazing in fields rather than cows that “used up” after two years. Image and reality are vastly different.

Animal Liberation still holds true to its principles after forty years. The updates have kept up with current developments and Singer still does use reason over emotion to back his points. It is an informative read, but not one that gives comfort or pleasure. It is information that does need to get out, read, and discussed. No matter which side of animal rights the reader stands, this book reminds the reader of what is really taking place and let’s his or her conscious make the decision.