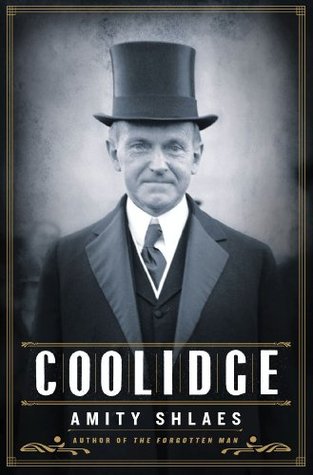 Tucked in between Woodrow Wilson and FDR were three presidents that are not usually given too much attention. Harding died in office leaving his vice president, Calvin Coolidge, to take over. Following Coolidge is Hoover, a great man, but remembered for Hoovervilles and the Great Depression.

Coolidge himself is a remarkable man and provides a very interesting biography. A great speaker and the first president to make a radio address, he was better known as “Silent Cal.” The story goes that a dinner party a young woman sitting next to Coolidge challenged him that she could get him to say more than two words during the dinner party. At the end of the party, Coolidge looked at her and said, “You lose.” Although considered a negative person, Coolidge was one of the most accessible presidents. Notes in the book tell of how many handshakes an hour Coolidge gave at events; an amazing amount when you break it down into shakes per minute. More than just a stuffed suit, Coolidge was photographed as in an Indian headdress, fly fishing gear, and dressed as a cowboy — not what one would expect from a stiff New England Yankee.

Coolidge, economically seems to have been Reagan’s role model. In economics, he looked to cut spending anyway he could. He lived a rather frugal life and applied that to his view of government spending. He thought of the government budget should be the same as a household budget. World War I created a massive amount of federal debt and it was his duty to fix it. As the governor of Massachuttes, he fought against strikers including the Boston Police department. He supported the Mellon Plan for tax cuts to increase revenue, and the plan worked. Coolidge managed to reduce the national debt and create a surplus. He fought hard to prevent the surplus from going into new spending programs. Coolidge also stayed out of state’s business. States should handle their own problems. When The Great Mississippi floods hit Coolidge kept the federal government out of the relief effort. He made a personal donation and helped with fundraising, but there was no “FEMA” type response like today. He also kept out of the Sacco and Vanzetti case because he believed it was a state matter. Coolidge seems to be the proto-Reagan right down to problems with the (original) Sandinistas in Nicaragua. Of course, there are differences between the two men, but the similarities are surprising enough.

Shlaes writes an excellent biography of a little-known president. From his simple roots and unexpected accent to the presidency, Shlaes covers the details of the man’s life and dispels the myth of a “do nothing” president. Clever, witty, steadfast, and quick to the point, Coolidge was much more than his current political image.

Thanks to Rachel at http://bookishlywitty.blogspot.com/ for the recommendation. Check out her site for other great reads and commentary.

Shlaes writes a column for Forbes, and served as a nationally syndicated columnist for over a decade, first at the Financial Times, then at Bloomberg. Earlier, she worked at the Wall Street Journal, where she was a member of the editorial board. She is the author of “Coolidge,” “The Forgotten Man,” and “The Greedy Hand, all bestsellers. Her first book, “Germany” was about German reunification.

Miss Shlaes chairs the board of the Calvin Coolidge Memorial Foundation, situated at the birthplace of President Calvin Coolidge. Michael Pack of Manifold Productions is making a documentary film of her movie “Coolidge.” Her new book is “Forgotten Man/Graphic” with artist Paul Rivoche. This book is for classrooms and thinkers everywhere.