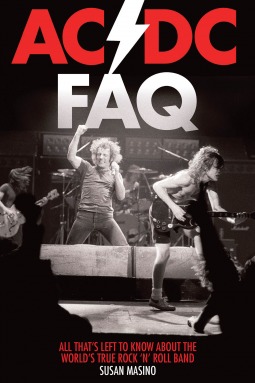 AC/DC FAQ: All That’s Left to Know About the World’s True Rock ‘n’ Roll Band by Susan Masino is the history of one the hardest rocking bands over the last four decades. Masino has been a rock journalist for over thirty years, and has written five books, created and hosted the 94.1 JJOLocal Stage radio show from 1997-2004, and produced 8 local music compilation CDs. Masino also appears in the Van Halen DVD, The Early Years, and Let There Be Rock-The Movie.

AC/DC holds a rather unique position in Rock and Roll history. Of those who listen to rock, I don’t think I met anyone who hated the band. Of those who liked AC/DC, ask anyone to name a bad album or a bad song. Chances are they can’t. Critics will say it is because all the songs sound the same. True, AC/DC didn’t fall into the ballad fad of the 80s or change their style as pop music changed. They sound the same today as they did in the 70s. Some people called AC/DC heavy metal and in reality it has just been rock and roll. When the author interviewed the band and asked how they categorized their music, Agnus Young answered “A rock band. Just a rock band,”

I have read many rock band/singer biographies and this one stands out. It’s not necessarily because of the band, but because of the author. In most biographies, the author either wants to sensationalize or scandalize the band. The more dirt dug up the better the sales. Masino is truly a fan and her excitement shows through the entire book. She tells the good and the bad and almost seems to apologize for the bad. I learned some things from the book that after decades of listening to the band I never knew. For instance, “The Jack”, which just seems like an odd lyric is actually a reference to gonorrhea and Rosie is a real person. AC/DC played as hard as they rocked.

The AC/DC FAQ is an in-depth look at the band. Masino’s method of writing is interesting in itself. Rather than a start to finish timeline, she breaks it done into subjects. Band member biographies, individual albums, individual tours, band influences, tech talk with Agnus Young, and some of her band interviews. This style makes it easy to find what you are looking for if you are wanting to use the book as a reference. Masino writes a good deal about Bon Scott and the effect his death had on the band. Brian Johnson as the new lead singer jumped right in with the recording of Back in Black which is now the second biggest selling album in rock and roll. AC/DC defied the odds. Most bands lose their lead singer and quickly disappear like The Doors or become ridiculed like Van Halen – Van Hagar. AC/DC came back stronger than ever and are perhaps a true team of equals.

This is a detailed and professional history of the band. The personal information on band members might surprise many. The members are not Bently owners living in mansions. Brian Johnson, however, does race cars. But to balance that Agnus doesn’t even have a driver’s license although he did have a mansion built. Perhaps another example of balance and teamwork in the band. The AC/DC FAQ is perhaps one of the most detailed band biographies I have read — Informative, searchable, organized, and personal.