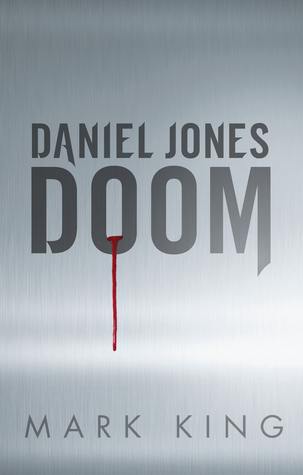 It is not odd to remember a book’s storyline after two years. It is also not that odd to remember a book in the context of what was going on at the time when you read it. I do think it is a bit unusual when a book takes priority over scheduled events that you have been looking forward to. I was really looking forward to seeing Rickie Lee Jones in Dallas. She has been a favorite singer of mine, but life events and the military kept me from catching even one of her shows. I finally had a chance to see her in Dallas. At the time, I also received a copy of Frenzy: A Daniel Jones Story to review. I started the book a few hours before catching the train. Read it on the train. Read it at the venue before the concert. Regretted when the lights went down and the show started. Read it on the train home, and finished it late that evening. It was that kind of book.

I was happily surprised to hear from Mark King just over a week ago that he had the second book in the series ready and would like to send me one of the first copies. Daniel Jones: Doom arrived a week later and it had a lot to live up to. Mark King is a private man aside from mentions of traveling, his blog, and living in Norwich, he is pretty quiet about himself. From the information on the cover flap, it looks like Frenzydid pretty well.

I gave up fantasy and science-fiction/fantasy a while ago and read mostly non-fiction. When I tried to pick up a book in the genre its been difficult to want to read through it. I read many of these books in the early 1980s but since then, it has been hard to find a match for me. The Daniel Jones series, however, seemed to hit the spot perfectly. I gave the first book five stars which is really unusual for me to award to contemporary fiction. The characters seemed to be just right. There was a mix of experience, youth, recklessness, and caution among the characters on the side of good. Evil held that relentless drive that made them believable and hated; there was little in the way of their weakness. There was hope, blind hope, the darker side of human nature, and a sense of community mixed into the story in a near perfect ratio.

Doom picks up after Frenzy ends with very little time passing. It keeps to the formula set in Frenzy with the same characters, with a few minor additions. The story now lets on a bit more about the characters and exposes new and perhaps unexpected connections between the core characters. The new revelations work well in the story and are not forced to make the plot work. They blend well together.

Although not much time has passed for the characters between books, plenty of time has passed for the reader. It has been eighteen months and more than two hundred books ago since I read Frenzy. Doom very gently reminds the reader of the events in the past book while progressing in the new story. I couldn’t quite place the character Wolf in the story, I knew who he was, but had forgotten exactly what his role was in the first book. The character’s past from Frenzy was reintroduced in Doom by his rival piecing together Wolf’s past while plotting against him. Cleverly done, and very effective. The important parts of the past are recounted in a non-intrusive way and eliminated my need to go back to the first book and use it as a reference.

The story is well done. The plot flows smoothly and moves at a quick pace. The events in the story are all plausible if you buy into the overall premise of aliens occupying the earth — it is science fiction, after all. The actions of the aliens are really no different than any occupying force in history. Maintain dominance, recruit help from the local population, remove methods of resistance– like weapons, organization, and printed communication. Like pacified populations, most people conform, especially decades after the occupation. A few fight and use their differences to build a strong team. Doom is a sequel that fully lives up to the original book. It is part of the plan and not an afterthought. Like the first book Doom brings closure to the immediate storyline but leaves it room for continuation. A very enjoyable read and well worth the effort. Great science fiction.