Book Review — Where the River Burned: Carl Stokes and the Struggle to Save Cleveland 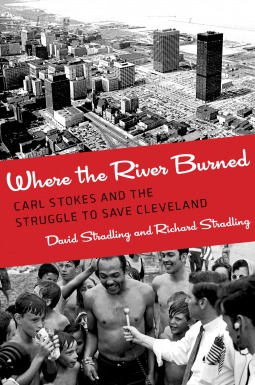 Among the worst of them all is the 80 mile-long Cuyahoga. Some River! Chocolatey-brown, oily, bubbling with subsurface gasses, it oozes rather than flows. ~ Time Magazine

I grew up in Cleveland in a Polish neighborhood in the 1960s and 1970s. My neighborhood was very ethnic with many of the older residents still speaking the language of the home country. I enjoyed growing up there and although I have not been back in over twenty-five years, Cleveland is still my city. What was so great growing up there? I would be hard pressed to say anything more than sentimental reasons. We had the worst school system in the state. We had a marginal football team and baseball team that never seemed to break 500. We used to fish for jumbo perch near off the 72nd Street pier, but pollution killed the fish. The steel mills and Municipal Light and Power seemed to darken the skies with pollution. But as kids, we played football and baseball on the red brick streets and there seemed to be something magical about growing up on Vineyard Avenue on the southeast side of town.

Yes, the Cuyahoga River did catch on fire in 1969. It was a major news outside of the city. Those in Cleveland knew the river had caught fire several times in the past. Cleveland grew fast and with fast growing cities there is rapid development and little planning until there are problems. Problems caught up to Cleveland in the 1960s.

Cleveland is now, and was then too, very segregated. Even in white neighborhoods it was segregated ethnically. The main problem, however, was black and white. Blacks were located in several poor areas of the city including Hough which was the site of rioting. Hough was at a time a very nice neighborhood, but people moved out, the tax base was reduced, businesses followed and eventually it became a ghetto. Race issues and poverty became a major problem for the city. One program with some success was the rat eradication program. The poorer areas of the city were heavily infested with rats.

Pollution was another major problem. I have memories as very young child of swimming in Lake Erie’s Edgewater Park, before the pollution closed the beaches. Imagine a city on a lake, but without any water recreation because of the pollution and algae blooms. Coliform bacteria make the water unsafe for swimming and recreation. 1000/ml was the coliform limit that closed beaches. Some areas along the shore reached 110,000/ml. Mayor Carl Stokes wanted to open beaches again he fought to clean up the Cuyahoga and Lake Erie. He had some success, but nowhere near enough. The city came up with a plan to open beaches. Essentially an area (White City Beach) was sectioned off by pontoons and weighted plastic curtains. The area was treated with chlorine nightly, 350lbs/night, to keep the bacteria count low enough to open the beaches. Stokes and his staff were there to swim along with the public. This approach was called “a pool in the lake” and was something the city was quite proud of. In hindsight, this sounds rather ridiculous. Essentially it is dumping poison into a lake to kill other poisons. On the positive side, it did open portions of the lake to the public and was much cheaper than the billion plus dollars of cleaning up the lake — Money that no one had.

Earthday plays a large role in this book also. The air pollution and water pollution were major problems. On the first Earth Day in 1970, Cleveland school children wrote the mayor about pollution. I was in kindergarten at the time and we drew posters that were going to be sent to the mayor. I drew a rocket, billowing smoke as it was taking off. After drawing and coloring it, I was told rockets used hydrogen and oxygen as fuel so it wasn’t really pollution, but rockets were cool.

Where the River Burned concentrates its history on Mayor Carl Stokes terms as mayor. It was a critical time in the city’s history and Carl Stokes was energetic and determined to fix the city. He seemed to be that rare honest person who cared more for his city than he did for politics. He was from that poverty stricken east side and he rose to become the first black mayor of a major US city. He reminds me of President Ford who walked into so many problems when he assumed office and diligently worked to fix them. It was a superhuman task in both cases, but the men put their duty ahead of personal gain. These were not only men of integrity, but politicians with integrity. Not perfect but they did their best. Stokes turned down a request from LBJ to come to Washington for an MLK memorial, Stokes, chose to stay in Cleveland in potential hot spots personally working to stop any violence or rioting. Compare that to the next mayor of Cleveland, Perk, whose wife turned down a request First Lady Pat Nixon, because the event was on her bowling night.

Yes, the joke about the river catching fire did get old, and yes I still get asked if the river really did catch on fire. It does not bother me anymore. In Cleveland, they fully recovered from it and take it in stride with a Burning River Pale Ale from a local brewery. The book for me is full of memories, places, and names of Cleveland’s movers and shakers. It is a virtual time machine to my much younger days. This is an absolute read for any Cleveland native or those interested in urban pollution and the history of race issues and poverty. Simply outstanding.