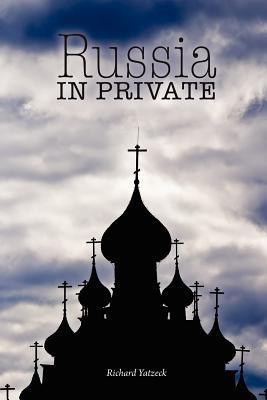 <i>Russia in Private</i> by Richard Yatzeck is a personal account of several travels to the Soviet Union and Russia. Yatzeck has been a member of the Lawrence University faculty since 1966, teaching courses on 19th and 20th-century Russian literature and Russian literary traditions. He spent a year in the former Soviet Union studying at Moscow State University after graduating Phi Beta Kappa with a bachelor’s degree in comparative literature from the University of Wisconsin-Madison, where he also earned his Ph.D. In 1997, he directed the Associated Colleges of the Midwest’s off-campus study program in Krasnodar, Russia.

As an undergraduate, I loved Russian history. As my honors project, I documented and re-assessed the reign of Ivan the Terrible. The “terrible” actually better translates to awe-inspiring than anything negative. Czarist history was a fairytale that continually when wrong. The Soviet Union had much more in common with totalitarian rule than actual communism. It was one on the most interesting histories I have ever read or studied.

I was expecting much from this book. I was looking for an outsider’s look at what the average citizen thought of the Soviet system. Perhaps a few touching stories from the locals or discussions with the true believers in the system. Instead, the book read rather like a travelogue. It combined several trips of information and fairly dry reading. Even parts that could have been exciting were told in a very stoic manner. Several old jokes were brought up again:

Perhaps I have read too much on the subject in college and graduate school to appreciate this book. I feel that for someone without a background in the Soviet Union, it would be very informative regardless of the writing style.

There is plenty of information on historic cities and sights. Yatzeck takes time to include stories and selections from Russia’s famous writers and poets. Also interesting is something usually not found in most texts, food. Everyday food and special food for westerners are covered in the book.

I liked the early part of the book where Yatzeck was a believer in communism and his evolution to a self-described anarchist. I found his earlier years much more interesting than his later travels. It seemed to have more personal substance. Without a doubt, Yatzeck is a man with many stories and it wold be a great experience, personal and educational to sit down and talk to the man over some Armenian cognac. The book, however, seems more of an academic record of events than a personal story telling.