Book Review — From Field to Fork: Food Ethics for Everyone 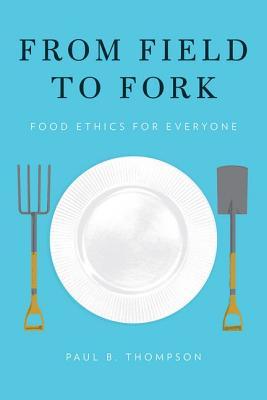 From Field to Fork: Food Ethics for Everyone by Paul B. Thompson is a different look at food ethics. Thompson is a philosopher currently teaching at Michigan State University, where he holds the W.K. Kellogg Chair in Agricultural Food and Community Ethics. He earned his B.A. at Emory University before going on to earn a Ph.D. in philosophy at the State University of New York at Stony Brook.

Thompson is a philosopher and his arguments follow a philosophical reasoning. I took plenty of political philosophy in graduate school and was familiar with his references. His three “M”s of philosophy are Marx, Mill, and Malthus. Mine were Marx, Mill, and Morgenthau so it was not a far leap for me. Mill and Kant, however, make up most of the European philosophy Utilitarianism and reason and perception. Amartya Sen is used in some modern thinking, and Vandana Shiva is used in some of the GMO discussion.

This might be a complex book for average American thinking because in general Americans look only at the surface and like their arguments simple. “It’s wrong to kill an animal for culinary enjoyment,” vs “We have canine teeth to tear meat.” “Farm subsidies support farmers,” vs “Majority of the subsidies go to Con-Agra.” We like clear cut, one or the other choices, like our two party system of government. Thompson does not take sides but examines reason and utility to form arguments and then checks it against itself. Utilitarianism can be quite brutal in itself.

The arguments and ideas are interesting and people, including myself, miss some of the points. By not eating that piece of meat on the plate in front of me, I am not preventing that animal from suffering. I could not want to eat meat for very selfish reasons, like my health. Does a food donation from “Big Tobacco” nullify its benefits because of its source? Is obesity an individual’s problem or it a public problem. If my insurance rates go up to cover the cost of obesity related medical conditions, doesn’t that make it my problem or society’s problem? What happens if what you do for one purpose becomes a benefit for another? Upton Sinclair wrote “The Jungle” to bring about changes in labor. People losing limbs and falling into bins to become part of the sausage were his concerns. Instead, the book is known for what it did for food safety. Sinclair said he aimed for the people’s heart and hit their stomach.

I picked this book up because as a strict vegetarian I thought it would be about animal rights. I was only right in a very limited sense. Thompson covers food ethics in an all-encompassing way. He looks at the history, the arguments, what helps and hurts farmers, what works for some people and what doesn’t for others — indigenous people in the arctic can not develop a plant-based diet. He looks at food as an ethical and moral issue. If people are starving it would seem to be the right thing to send food aid to alleviated the suffering. But then what happens to all the subsistence farmers that sell part of their crops to buy things they need but can’t produce? Suddenly their crops lose value with free food flooding the market. What if the starvation is not the result of not enough food, but no infrastructure to transport it? The Soviets had that problem. Food rotted on train cars and people starved. The problem of starvation may be something deeper than what it appears to be.

Perhaps taking his lesson from Sinclair, Thompson aims at the entire food infrastructure. Not taking any chances, instead of aiming with an arrow, he aims with a Claymore and hits everything in his path. This is a deep, comprehensive, and balanced, work that is as much about philosophy as it is about food. We tend to tread very shallowly in today’s world. Sound bites took over for news discussions. Game consoles have taken over pick up baseball games. Newspapers have all but disappeared, and all information on the internet must be true. As much as Thompson’s book is about food, it also about deeper and fuller thinking of the world around us.

One response to “Book Review — From Field to Fork: Food Ethics for Everyone”