Book Review — The Triumph and Tragedy of Lyndon Johnson: The White House Years 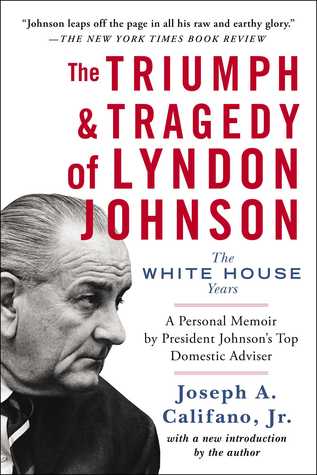 If one morning I walked on top of the water across the Potomac River, the headline that afternoon would read: ‘President Can’t Swim.’ ~ LBJ

The Triumph and Tragedy of Lyndon Johnson: The White House Years by Joseph A Califano is an insider’s look at the LBJ presidency. Califano, a Harvard Law graduate, served time in the Navy and Defense Department. At the start of the Kenedy Administration, he was selected by Robert McNamara to become one of the “whiz kids” in the Defense Department. His work did not escape notice as LBJ appointed him Special Assistant to the President in July of 1965.

There have been plenty of biographies of LBJ, but this one is written by a man very close to him. More than just facts and numbers, Califano brings a personal side of LBJ into view. LBJ was president and he was determined to let people know he was their president. He was very Machiavellian in his politics and that is meant in the traditional sense of the word. Machiavelli was brilliant in manipulating people to achieve a goal, and that goal was generally for the good. LBJ, like Machiavelli, tends to get a bad wrap in contemporary history. LBJ is best remembered for the war in Vietnam, the draft, and the Chicago riots.

Califano tells how LBJ used people in a very divided Democratic Party and his political opponents, the Republicans, to achieve his goals. Califano tells of swimming with LBJ at the ranch in Johnson City. In the middle of the lap, LBJ stops and talks to Califano. Califano is treading water struggling to stay afloat as LBJ talks to him jabbing his finger as he goes. LBJ is clearly in power here not only is he the president, he knew exactly where to stop so that his feet were firmly on the floor of the pool. LBJ made an ally in Everett Dirksen the Republican Senate Minority Leader. Dirksen was able to gather support for LBJ’s programs when Southern Democrats refused. LBJ did not pander to the other party, he did not hide his dislike for House Minority Leader Gerald Ford. “Ford is so dumb he can’t walk and chew gum at the same time.” Johnson once said about the future president. The example in the book of Ford reviewing LBJ’s Vietnam options is used to support that claim.

Johnson always seemed the gruff old man to me. Califano shows the opposite is true in both cases. Time on the ranch showed Johnson to be a fun person at times and very human. The other point surprised me also. Johnson was 55 when he became president and left office at 60.

What was the purpose of LBJ’s politics? What did he really want his legacy to be? Civil Rights, The Great Society, and equality. Johnson worked hard for civil rights and fought many in his own party over the issue. He talked and met with Martin Luther King. Johnson saw poverty first hand as a school teacher in Texas. He wanted to see the end of poverty in this country and an end to discrimination. This can be seen in both the programs he proposed and the people he appointed. He tried to make the draft fairer by drafting 23-year-olds first nullifying the college deferment for the rich. He wanted to save America’s natural beauty. LBJ pushed for environmental protection acts and beautifying the highway system.

Although probably best known for gathering of political support, arm twisting or otherwise, LBJ was not afraid to cross party lines. He met at least twice with Eisenhower for advice. His legacy still remains Vietnam. He didn’t want the war, but we were there and leaving would be a sign of surrender to the Soviets. He really believed that American boys should not be doing what Asian boys ought to be doing for themselves. The Triumph and Tragedy of Lyndon Johnson is a detailed and revealing book about the 36th president of America. It is the story of what he fought for, what he faced, and how he lived. An excellent biography of a historically misunderstood man.