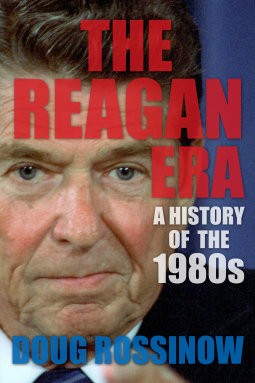 The Reagan Era: A History of the 1980s by Doug Rossinow is a fairly comprehensive look at the Regan Era. Rossinow is a professor of history at Metropolitan State University in St. Paul, Minnesota and is the author of numerous works, including Visions of Progress: The Left-Liberal Tradition in America. He has been a Fulbright Scholar at the University of Oslo and is past president of the Peace History Society.

The 80s were a golden age for me. I became an adult, spend time in Southern California courtesy of the Marine Corps, traveled the world, and was employed the entire decade. I rocked to Van Halen and later to hair bands. I worked on computers, rode motorcycles, had a bumper sticker that read “I’d rather be killing communists in Central America” and had a great decade. Thanks to modern social media, I have caught up with several friends from back then and we all look back fondly on that time. The future was bright back then. America was back on the rise and we were riding the wave.

I think we all have favorite presidents that captured our imagination. My grandmother spoke highly of FDR. My parents praised JFK. My son loves Clinton. For me, it was Reagan. It’s was morning again in America. Needless to say after college and especially after graduate school my youthful idealism faded with the facts. Rossinow seems to have those same initial feelings: a proud Reagan supporter, who later has second thoughts.

The Reagan Era is not an attack on the former president, but a very well-documented account of the Reagan years concentrating on Reagan and his staff. Investigations of Edwin Meese who seemed to invite scandal became Attorney General before resigning “vindicated” by a finding of “Insufficient evidence to indict.” There were scandals outside the government too. Banks, Savings and Loans, and televangelists all found their way to the headlines. Many people gained power in this era such as William Casey, James Baker III, Donald Rumsfeld, Dick Cheney, and many more.

We had a Red Scare of our own as we saw communists “in our own backyard.” We sponsored freedom fighters in Latin America and Africa. The later without much public attention. Jean Kirkpatrick tried to ease the idea of supporting right wing dictators over left wing dictators (communists) by suggesting the right wing is more open to democratic reforms than the left. We entered an arms race. We built a six hundred ship navy. We developed the MX missile and developed an intermediate range missile just to make the Soviets remove theirs from Europe. Reagan defied the logic of the anti-ballistic missile treaty with a far-fetched Strategic Defense Initiative. America did win the Cold War, but it was not exactly like we think we did. Rossinow provides a great deal of documented information on exactly how it happened.

We like to remember the 80s as a Golden Age and of rebirth of America. Rossinow show us cracks in the facade. In fact, many of the problems we see today have their roots in the 1980s. It was when the 1% grew in wealth and the middle class shrank. Although Reagan is known for his historic tax cut, the tax increases and revenue enhancements are pushed by the wayside. The man who wanted less government increased spending considerably. The Reagan Era covers many aspects of the decade. I just chose a few to mention here. Nearly a quarter of the book is documentation and cited sources. The information is accurate.

Otto von Bismark is credited with saying “Laws, like sausages, cease to inspire respect in proportion as we know how they are made.” The eighties no matter how much I enjoyed them are rather like Bismark and his sausage. They were great… until I learned how they were made.