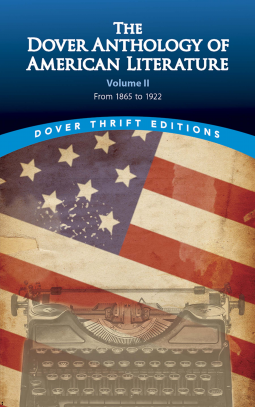 The Dover Anthology of American Literature, Volume II edited by Bob Blaisdell covers American Literature for 1865 through 1922. This anthology covers a great deal of writing, but it is not all encompassing. There are several things that make this collection standout. First it is the inclusion of authors I have not read before. I appreciate anthologies that lead me to discover new writers. Charles W. Chesnutt was a writer from my hometown of Cleveland, Ohio, and Mary E Wilkins Freeman are two of the writers I first read here.

The political and social voices of the period are also presented. There are excerpts for Ulysses S. Grant’s memoirs, and the voices from the oppressed are presented with words of Sitting Bull and Native American chants. Booker T. Washington is represented with an excerpt from his Up from Slavery. Theodore Roosevelt describes the majesty of the Grand Canyon.

The expected the writers are also represented: Mark Twain, Stephen Crane, Jack London, and Robert Frost to name a few. There is a Gertrude Stein poem, although complex, is much easy to read and comprehend than her works in Tender Buttons. There is also a reminder of who some American authors were. Ezra Pound was an American but mostly known for his time in England. T.S. Eliot was an Ameican from St. Louis, but he is so entwined in English Literature many forget his nationality. So much so, that long ago, in my college course English Literature II, I reviewed “The Waste Land.” I had forgotten he was American too, I know of his association with the Bloomsbury group and the Woolfs who printed the UK edition of “The Waste Land.” My initial thoughts were why is a British author in this book. It’s nice to learn something when you least expect it.