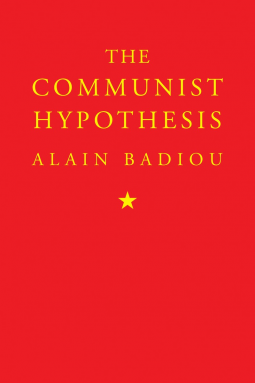 The Communist Hypothesis by Alain Badiou is a work of political philosophy (even though the author denies it). Badiou is the former chair of Philosophy at the École Normale Supérieure.

Communism failed and that is a given, but what is failure? There is a saying that goes “Failure is not falling down. It is refusing to get back up.” I was expecting to read a detailed account of how the left and the working class will rise again. As a Marine in the Cold War, I was committed to defending America and its allies from the communists. Since that time, I have gotten older, more read, more educated, and more aware.

Badiou spends a great deal of time discussing the Chinese and Soviets. I have a problem with that. Marx and Engles explained what was needed for communism to start. Communism needed to rise from industrialized societies, not underdeveloped and agrarian societies. Both examples, China and Russia, occurred in undeveloped countries. In fact, every example of a communist revolution has happened in an undeveloped country. The Soviet Union and China were, and in China’s case still is, a totalitarian state. There no doubt that a class system exists or existed in both systems. Both systems are failures even without competition from the West. China has even joined the west in limited capitalism and foreign investment. Communism in theory is very different than how it has been practiced.

Badiou seems to want to defend the failed system. He looks down at the successful democratic socialist governments in Europe as being polluted. It would seem that system has done more to bring equality to a society than the “communist” systems. When you fail, you want to learn from your mistakes, not repeat them. By defending the Maoist and Soviet systems, Badiou is just repeating the same failures over again. I understand his passion, but not his direction.

I am glad Badiou mentions Hegel. Hegel dialectic is known to every political science student. It works like a pendulum. On one extreme is a thesis* and the other its anti-thesis* and eventually the pendulum stops in the center where the forces of both sides equal out and a stable state is maintained — Synthesis*. If this exercise is run with communism as the thesis, capitalism as its antithesis, democratic socialism is the result. That is the position of most of the successful and content countries of the world.

There may be a reason revolution does not happen in industrial societies. These members of those societies regardless of class know they are pretty well off in a world view of their situation. Also, the producers in these societies depend on the workers to make their products as well as consume them. No workers mean no consumers which mean no profits. Many people realize that unregulated capitalism is a bad thing, but few are willing to take up arms. We vote, we make our voices heard, but little else. The Occupy movement started quickly but lost steam as people realized that they were not threatened by the system enough to make an effort to change it. Industrialized countries have become complacent in their consumer culture. If they can buy, things are well.

Communism failed more from its method than its message.