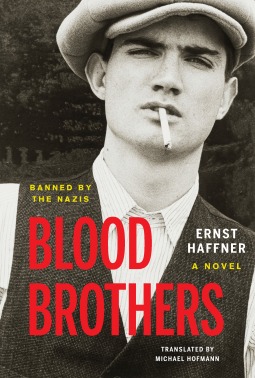 Blood Brothers by Ernst Haffner is a novel that takes place during the interwar era in German. Haffner was a social worker and this was his only book. Published in 1932, it was banned by the Nazi’s one month later. There is no record of Haffner after the war.

Haffner’s book details the lives of street gangs and the kids who make them up. The Versailles Treaty was tough on Germany and it was the average citizen who suffered the most. Gangs of kids from young teens to young adults group together in tight knit clubs. The clubs like street gangs today have a code of honor and a chain of command. There is a military like discipline among the members and a life of petty crime. Some fit into the lifestyle and others are leery of the criminal life. For some, it is their only choice if they want to survive on the streets.

Blood Brothers took me back to the first time I read The Outsiders back in my preteen years. It is rough, gritty, and goes deeper than the The Outsiders. Life on the street is rough whether you depend on crime or a more honest means to survive. Blood Brothers shows the reader that it’s not only the NYC underground where gritty lifelike street stories are born. A well written and excellent work of historical fiction.