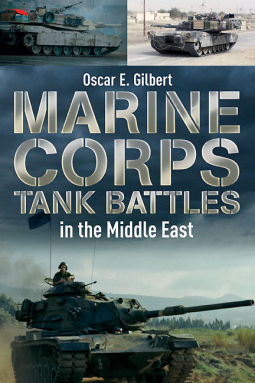 Marine Corps Tank Battles in the Middle East by Oscar E. Gilbert is a history and an examination of the use of tanks over the last two decades by the Marines. Gilbert is a former Marine artilleryman and has written on Marine’s and their tanks in the Pacific, Korea, and Vietnam. He has earned a PhD and currently works as a geoscientist.

I served in the Marines through the 1980s and I was not surprised in the slightest when the Marines showed up for the Gulf War first and in M60 tanks. These tanks came into service in 1960 while the tank the army would eventually show up with, the M1 Abrams, just went into service a decade ago. Marines keep the old stuff and keep it working and still manage seemingly impossible victories even when hit with the worst of luck. It is the person that makes a Marine, not the equipment. I remember seeing F4 Phantoms fly over my barracks while the other services were their F-teens. One thing I don’t remember seeing are tanks. I don’t recall meeting any tankers — plenty of grunts, admin, Amtrac drivers, Motor T, pilots, and artillery. I can’t recall ever meeting a tanker. I even remember the day we received our MOS in boot camp. The senior drill instructor asked if anyone was going to tank school. No one responded. He then said, “I never had a private get tanks. I wonder where tankers come from.”

I will admit I jump at any book about the Marines. Marines and tanks were really intriguing. Of course, the Marines have tanks, but are more known for their rapid deployment, high maneuverability, and fifty tons of metal does not lend well to that philosophy. Anyone who read Generation Kill might think the Marines only mobile support were improvised armored Humvees equipped with a M134 minigun. Gilbert brings to light part of the Corps that most people think of as the army’s job — heavy armor. The Marines did arrive for Desert Shield in M60 tanks which was noticed and questioned. Reservists began training on the M1 tanks before deploying and the M1 tanks were gradually entered into Marine service during the conflict.

Gilbert gives a short history of both Iraq and Afghanistan in the book. He also gives some Marine Corps history as to the Marines experience in the Middle East and their use of tanks. The battle histories are interesting, but the actions and attitudes of Marines portrayed in the book is what makes this a great read. Improvise, adapt, and overcome are words all Marines know. Gilbert gives the readers plenty of examples. Marines with old tank turbochargers, some socks, and bottled water made a water cooler which was a life saver in 120-degree heat and no refrigeration. A Marine unit receives sixty turkeys for Thanksgiving but has no overs or friers, so they custom make a huge smoker with what they have.

The use and importance of tanks in the conflicts seems to be hit and miss. The Marines meet many setbacks, but at times mobile direct fire artillery certainly comes in handy. The Marines missions are not always favorable for armor. When it came to house to house fighting it was the Marines that were called. Army cold war doctrine avoided urban fighting. The Marines were experienced in urban fighting Korea and Vietnam and that was the reason they selected for that role. Considering two decades had passed, the actual Marines doing the fighting were not experienced in urban fighting. In Baghdad, the Marines secured the area surrounding Saddam Hussein’s Palace and were told to wait for the SEALs to clear the buildings. The Marines waited, got bored, wandered through the deserted palace, and then watched the heavily armed SEALs assault the empty building.

Many events and personal stories are covered in everything from improvising equipment to learning how to use new equipment that arrived like the “roller dude.” Marine Tank Battles in the Middle East show that “Marine attitude” in heavy armor. As one Marine said about dealing with harsh conditions and making things work, “It’s stupid little things like we put pantyhose over all the air intakes. It’s simple. It’s discipline. It’s a give a shit factor.” It is what makes Marines, Marines and makes them successful. This is an excellent book it is about tanks, but more so it is about being a Marine and what the Marines face in combat. I enjoyed this book a great deal and was happily surprised to see my old battalion commander, from the Marine Security Guard Battalion, General Boomer mentioned in the book. A very good and informative read.