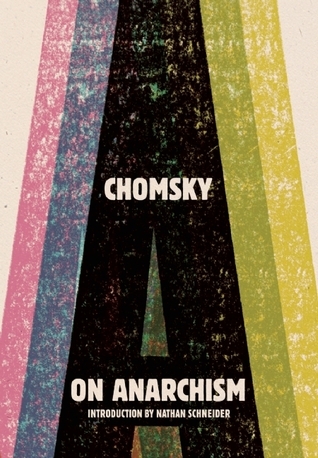 On Anarchism is a collection of excerpts from previous interviews. Chomsky needs no introduction as he is well known as a voice of the far left — articulate and well spoken. He is not the political sound bite of the evening or 24 hour news channel. He is the details and the details that get drowned out of the mainstream media.

Chomsky champions the worker and the individual. Citing Tocqueville, Chomsky makes the point that many governments (including our own) are based on the right of property over the right of the individual. Remember the Bill of Rights came two years after the Constitution. He makes the stand that the US operates under State Capitalism just as the Soviets were State Socialism. The state becomes the problem in both. The idea of the free market in the US is “baloney” according to Chomsky. America has a planned economy. The state subsidies to agriculture, pharmaceuticals, and technology allow these industries to profit. They do not rely on the market, but on tax dollars. The difference between America, the Asian success stories, and the Soviet Union is the amount of state centralization and bureaucracy. The Soviet system was inefficient, but it did provide a safety net for the people. Compare the standard of living before and after the fall of communism.

In a democracy the power should lie not just formally in the population, but actually in the people. People are losing control of the government. Politicians court corporations and favor their interests. American’s themselves seem to be caught up in a trap. They hate taxes, but want roads, schools, and a huge military. What is called a welfare state is the recognition that every child has a right to food, healthcare, and an education. This recognition came with a century of work from labor and socialism.

Adam Smith the champion of the free market believed people should be free. They should be free from authoritarian government and authoritarian institutions. Chomsky argues that Smith was the opposite of a capitalist. He believed that people’s character involves sympathy, solidarity, and the right to control their own work.

Chomsky is an idealist and admits that his ideas may not be completely possible today. However, in the eighteenth century political democracy was a dream, yet by the nineteenth century it existed. Chomsky believes that change can happen. He also believes that people need to stand up and call out injustice. In order for change to happen, it will take effort. People today are too distracted by superficial flashes and ignore their own interests. A distracted society will be taken advantage of and find their rights stripped away, usually by their own vote.

2 responses to “Book Review: On Anarchism”