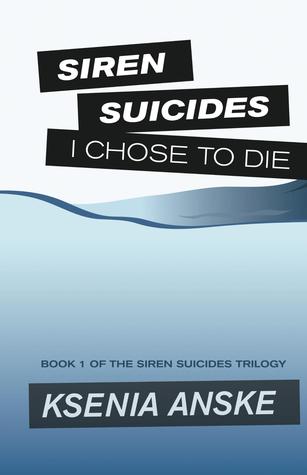 I received this book free from Amazon in an author promotion. That was probably a year or so ago. It “talked” to the author on Twitter mostly asking about her bicycle. I have followed her on Google plus and saw excerpts from her book readings and signings. She is a bit quirky, showing up for readings and signings dressed as a ballerina. Anske reminds me a bit of Carol Kane in Scrooged, hopefully without the slapping and the quick kick. She is from Russia and moved to the US in 1998 and learned English after immigrating. This is impossible to tell by her writing. There is no hint of an “accent” or any clumsiness with the language.

Suicide is one of those things that most people do not think much about, until someone you know takes their own life. It is a subject that then draws you in and at the same time repulses you. In this story Ailen Bright choses to end her life on her sixteenth birthday. She makes her case to the reader, but her and her best friend do spend quite a bit of time getting high so you wonder if this is all stoner talk or something deeper. Ailen is imaginative and this shows in her naming the sirens serving as legs and the faucet of a very large bathtub. Ailen spends many hours in the bathroom because it is the only room in the house with a lock on the door. The sirens become characters in her mind.

From her first unsuccessful attempt at taking her life through her second and successful the story is told in the first person in almost a stream of consciousness. There is fear, confusion, anger, and determination in Ailen’s voice. All the thoughts surrounding death, the process, and what happens afterward flow together. There is a busy and cluttered mind as different thoughts move to the front of her consciousness.

The story is good. It is definitely a fantasy, and although I am not a huge fan of fantasy, I followed the story. The story, however, was secondary for me. I was intrigued my Ailen’s thoughts and how her brain worked when facing the unknown and the improbable/impossible. Anske has a real talent in this respect.

Subject matter aside, I found I Chose to Die fascinating. It was not what I expected, and perhaps one of the few book I liked for the writing style more than for the story itself. I am sorry I let this one sit on my “To Be Read” pile for so long.