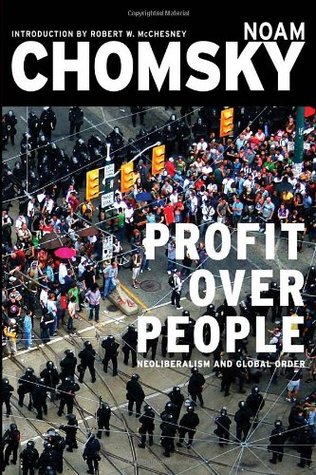 Profit over people has been a rallying cry for some time now. Chomsky put this book out in 1998 and it has been revised in 2011. I remember Reagan’s deregulation and saving American industry (usually with protectionism). I was in graduate school in the late 90s and remember the push for globalization. The irony there too is I was attended a very liberal university and the international relations program was big on globalization. Globalization was seen as open and free trade with each nation producing what it did best. The increased efficiency would raise the standard of living for everyone. Fear of losing American jobs was offset by cheaper products and a rising standard of living. Finally, globalization would bring peace. With trade creating dependencies on other nations for products and exports, peace would become the logical result. All this sounded fine, in theory, and instructors made a strong case for these ideas. Peace, prosperity, and free trade sounded rather ideal. There was a problem, however.

The job exodus, low corporate taxes, government subsidies, and corporate influence over government created the concept of neo-liberalism. Neo-liberalism is meant to inspire thinking of Adam Smith and The Wealth of Nations. Instead, it has created a system that has lead to the 1%. In 1971, 90% of international financial transactions were in the real economy — trade or long term investment. By 1995, 95% of the international transactions were speculative; only 5% were in the real economy. Chomsky places much of the blame on Nixon and the ending of the Brenton Woods System and the regulation and oversight it created.

Chomsky quite frequently crushes the belief that America spreads democracy and freedom to nations of the world. In fact, America has a long history of supporting dictatorships. More than a few democratically elected leaders have been overthrown directly or indirectly by the US. The reason boils down to US interests. Democratically elected leaders generally owe their allegiance to those who elected them. Generally this is the poor and lower-class in developing countries. People want jobs, healthcare, and affordable housing and food. Many times this means public ownership of resources — oil and minerals. It can mean land redistribution, tariffs, and a primarily domestic economy. These are threats to “Ameican Interests.” American business wants foreign ownership of natural resources and foreign investment/control of industry. Large plantation owners are more stable than small peasant farms.

United States offered to help governments open themselves to foreign investment and ownership. In Latin America, the United States offered governments protection of their borders. This allowed military spending inside countries to be concentrated on internal security. Increased Internal security allowed governments to hold power and keep the population under control. Stability and open markets were America’s interests. In the long run, all this has done is to increase the concentration of wealth into the hands of the few.

America’s freedom is something of an illusion we hold to. We established ourselves as a free country, but only white, land owning males had a say in the government. John Jay said that those who own the country should have the voice. Madison later would follow up by stating if everyone can vote, it would harm the land owners, eventually leading to land redistribution violating the key right of property. America considered a race of people to be only 2/3s a person. Women were not given the right to vote until the 20th Century. The original inhabitants had to wait until 1924 before they became citizens in the land of their ancestors.

For such a small publication Chomsky covers a great deal of territory and I have only touched on a few items. Our world is not what we see it to be. People are too willing to believe and turn that belief to blame. How could the World Court try and bring charges against the US for mining Nicaragua’s harbors? How can the UN not agree with the United States? How can countries not allow foreign ownership of their property? The question should simply be “Why can’t people see what is really going on?”.

One response to “Book Review: Profits over People”