Book Review — The Dover Anthology of American Literature Volume I: From the Origins Through the Civil War 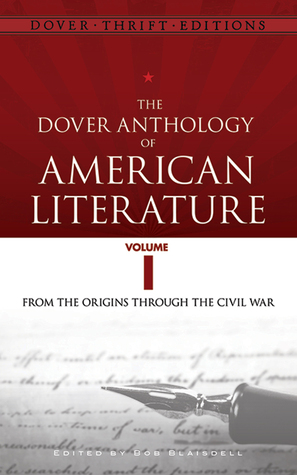 The Dover Anthology of American Literature Volume I: From the Origins Through the Civil War edited by Bob Blaisdell is a summary of two hundred years of American literature. The collection includes poetry, short works and excerpts from longer works.

As much as I read, American literature is a weak point. I like my poetry English and my literature French or Russian. I am not totally ignorant of American literature as some of it fit into my history background. Being an anthology of great works, the works themselves do not need reviewing, but rather how representative it is of the whole.

From the historical point, several keys events happened in the period: Settlement of the colonies, Indian relations, slavery, independence, westward expansion/exploration, women’s movement, abolition, The Great Awakenings, and the Civil War. Many of the writers included are very well known. Melville’s Moby Dick is sampled, Hawthorne’s Young Goodman Brown, and Scarlet Letter is sampled, and perhaps my favorite writer of the period, Thoreau and his On Civil Disobedience is included.

The collection includes many writers that I had forgotten and some that are obscure. Margaret Fuller, the activist. writes on the role of women. Julie Ward Howe, whose name most won’t recognise, wrote a poem that every American knows and has probably sung many times — “The Battle Hymn of the Republic”. Other writers include those that not usually thought of as writers. Tecumseh writes to the other Indian nations for unity of the tribes. Other writers record the Cherokee Creation Story. Anne Bradstreet who composed the first published book of verse in the colonies has her work included. William Lloyd Garrison and Frederick Douglass take up the abolitionist movement. Louis and Clark record their westward journey. Lincoln’s speeches and an excerpt from Stowe’s Uncle Tom’s Cabin round out the period.

This collection does offer a view of American history through literature and personal writings. The major points in American history are all covered through one or more author. The relations between the competing races in America is also reflected in the writings of native Americans, slaves, and free men. The literature chosen brings a human touch to the history that is recorded. The writing of James Fenimore Cooper competes with Black Hawk. The creation of an American style of literature championed by Emerson, expanded by Whitman, and popularized by Poe.

Looking at this work with the eyes of an historian it comes through as a fine representation of the early history of the United States. The writers and the content reflect the moods and experiences of a wide range of Americans. As America grew from a colony to a country on the verge of becoming a power, so did its writers. The history recorded in fiction, poems, journals, and letters show the same growth. As America came to its own on the world stage, so did its writing.