Book Review: No Logo: No Space, No Choice, No Jobs 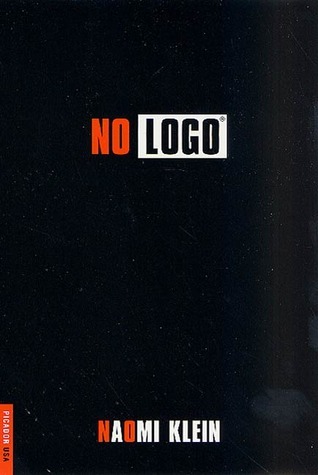 No Logo: No Space, No Choice, No Jobs by Naomi Klein is an examination of the change from products to branding and the results that has had on the population. Klein is a writer, journalist, and film maker. She writes a syndicated column for The Nation and The Guardian, and covered the Iraq war for Harper’s.

I read this book shortly after Shock Doctrine and recognized quite a difference in writing style. Shock Doctrine was a fast paced read for non-fiction while No Logo reads much more like a scholarly thesis. It is fact filled and so well documented that it slows the reading pace down. This is a book you read for information not simply enjoyment. Also know that even the updated book was released in 2002 so some of the technology is no longer as relevant.

I remember when brands represented a product and a reputation. Growing up Schwinn was a quality bicycle. When you bought a Schwinn bike you knew you were buying a quality product. Today the brand Schwinn still lives, the name bought and sold a few times, and now Schwinns are sold in the toy department at Wal-Mart. They are disposable bikes. Cheap to buy and expensive to repair. I work as a bike mechanic and I noticed many things that Klein has brought up in No Logos. There is still brand loyalty in the bicycle industry, but in reality it is pretty meaningless. If your bicycle is an aluminum Trek, Specialized, Fuji, or other higher end brand, the frame was made by Giant, also a bicycle company. If you bike is carbon fiber it came from one of three plants in China or Taiwan. Simply put, brand loyalty has little to do with the actual product. You are buying an image, not a product. This happens in other industries too. Years ago a friend was showing me his Ford Probe. “Look at this.” he said pointing to the valve cover. There was a Ford emblem held in place with two screws. He proceeded to remove the screws and Ford emblem to reveal MAZDA stamped into valve cover underneath.

Klein spends a great deal of words on branding and brand identity and how it has changed over the years. Before you made a product, sold it, developed a reputation, and that became the brand. Now you create a brand and hype and sub-contract out for a product. Microsoft’s Redmond campus was contracted out. A company took over the cafeteria, another took over cd manufacturing, essentially all but the core operations were contracted out.

Klein also brings up people that find trends to sell to corporations. People who go out and look for the newest hipster trends and sell those ideas. Some corporations have quit going after counterfeit merchandise especially in the inner city. The inner city/rap/urban culture is cool and even if the item is counterfeit, the right person wearing it will more than make up for the counterfeit by becoming an ad. Graffiti artists tearing up a corporations ads? Don’t fight back, join in. Chrysler Neon used to have a friendly little ad with “Hi” written over the top of the friendly little car. Chrysler, went ahead and pre-vandalized their bill boards with a fake sprayed “p” after the “Hi” the Neon was now made “Hip” apparently by the cool graffiti artists.

Also, interesting was a paragraph about the NAACP petitioning cigarette companies into putting more blacks into their ads in 1960. Thirty years later a church group complained that cigarette companies were exploiting black poverty in the inner city. I grew up in Cleveland, which was at the time a very segregated city. My public library was on the other side of the de facto border. Even back in the 1970s, as a child, I noticed the change when crossing that border: the cigarette and malt liquor billboards with black models were everywhere. The billboards were very colorful, very stereotypical, and today would be seen as racist.

Those were only a few examples in the book. Mega-Mergers of the 1980s and 1990s and the growth of Wal-Mart and Blockbuster bring more change to the American markets. Throughout this book one thought came into my mind. If all corporations had a cap on advertising budgets, how much cheaper would things be at the grocery store? There is an almost unimaginable amount of money spent on advertising.

Again, Klein produces a scholarly study on brands, mergers, ads, sweat shops, advertising in schools, and all the tricks corporations use to become kings of the consumer markets.No Logo can be a bit dry reading at times, but this book clearly is the foundation of her later work. In the 1990s we celebrated capitalism and consumerism destroying communism and state planned economies. Today it seems capitalism and consumerism are also trying to destroy itself. A very informative and well researched book.