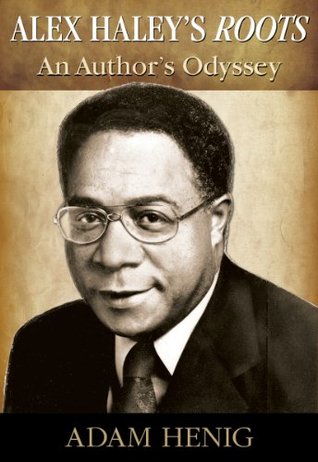 Alex Haley’s Roots: An Author’s Odyssey by Adam Henig is a short biography of the man who wrote one of the blockbusters of the 1970s. Henig earned his bachelor’s degree in political science with an emphasis in international and cultural relations from the University of California, Chico.

I was in the seventh grade when Roots premiered on network television. The image of the slave “Toby” being whipped was burned into my mind. “Your name is Toby, I want to hear you say your name.” Toby answers “Kunta Kinte” and the whipping continues. This was a powerful series coming on the heels of the bicentennial celebrations the previous year. This was also something I could actually watch because it was on network TV and not at the theaters. The movie mini series was probably the biggest television event in my childhood.

Alex Haley’s Roots covers mostly the time period during the release of the movie and the book tours that follow. There are a few flashbacks Haley’s earlier life. For as popular as Roots was, I knew very little about Haley before reading this book. A career in the Coast Guard, writer for Playboy, and co-writer of Malcolm X’s biography round out a successful sounding life. His personal life, however, had several failings mostly with his personal relationships and marriages.

One point that is brought out in the book, and later in the court cases, is whether the book was fiction or non-fiction. Doubleday released the book as nonfiction, although they never questioned the lack of bibliography or citations. Haley claimed it to be historical fiction. Part of that I imagine was part of the 1970s culture. You could hardly turn on a Sunday night movie without hearing “Based on a true story” which to a great many people meant they were watching a documentary. The fiction/non-fiction/research aspect of the book takes up a good deal of this biography. It adds a good deal of insight into the Haley and his work.

I walked away from this book with much more information and understanding than I expected. The biography itself takes up just over half the book. Unlike, Roots there is a copious amount of documentation. Henig has certainly done his homework and presents in a scholarly fashion. Also included in the book is a section by the author documenting some of his research experiences and his experience self-publishing Alex Haley’s Roots. A very good biography of a man that took center stage in the late 1970s with a books and movies that brought recognition to the people that were quietly written out of the American celebration in 1976.