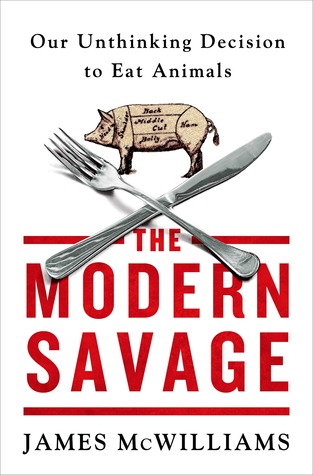 The Modern Savage: Our Unthinking Decision to Eat Animals by James McWilliams is a personal and emotional argument against the killing of and abuse of animals that are not necessary for man to survive. McWilliams received his B.A. in Philosophy from Georgetown University in 1991, his Ed.M. from Harvard University in 1994, his M.A. in American Studies from the University of Texas at Austin in 1996, and his Ph.D. in History from Johns Hopkins University in 2001. He currently teaches history at Texas State University, San Marcos.

I will start this review by stating that I have been a strict vegetarian for over ten years. I do not like the term vegan because I find it misleading. I do not eat meat of any kind and do my best to avoid using any animal products. That includes using not driving a motor vehicle because of the death it causes on our roadsides and the damage to the environment drilling for oil frequently causes. I try and do my best to leave a minimal footprint and cause as little pain to other inhabitants of the earth as possible.

I usually really like books like this because they reinforce what I believe. That is pretty simple human nature. However, I found McWilliams arguments to take an emotional approach to animal slaughter. Too many of the examples are what I would call “touchy-feely.” I am a little older than the author and like factual arguments. Emotional arguments may work on a younger audience, but to me they seemed more preachy than anything else.

I will give McWilliams credit for taking on some of the big names in the “sustainable” food world. He does a good job bring up some of the hypocrisy in the message. McWilliams also warns against listen to those who sold out to big media. Big media exists to make money and to make money the full and honest truth is often left behind.

On myth that McWilliams blows out of the water is that humanely raise animals live a happy life, except for one very bad day. That bad day is death, and death extends far beyond a day, and comes much earlier than expected in a normal life cycle. Factory farms are much maligned and with good reasons. The alternatives, however, are also deeply flawed. McWilliams explores these alternatives and presents the flaws in theories. Backyard (raised) animals still experience slaughter and well as animals raised in the other popular phrased environments, such as free range. They may have a happy life, but it is short. They are simply a means to an ends.

Another point brought out in the book is the natural life humanely raised animals live. The idea of green fields and the former California “Happy Cows” make the idea of dairy and meat consumption a sound like a happy bargain. The idea that domesticated animals live in a state of nature on small farms is ludicrous. Has anyone seen a wild cow? Perhaps a wild chicken? The fact that livestock do not exist in nature makes it a difficult case that they live a natural life. Breeding of livestock makes it harmful for poultry to live a free range life. Fast growth and oversized bodies make walking free dangerous to the chicken.

McWilliams makes his case fairly well. I wish it would have relied less on emotional response. Some of the stories are touching others a bit too emotional for something that could be a bit more fact based. I appreciate McWilliams convictions. He stands by his beliefs and does not waver even in the face of such popular writers as Michael Pollan. McWilliams does his best to end that terrible phrase “one bad day.” He digs deeper into that feel good area of humanely raised and free range labeling to expose what it really is. The Modern Savage is a well written book and helps re-establish the beliefs of those who already do their part. The emotional tone, however, is unlikely to win new converts.