Book Review: Behind the Gas Mask: The US Chemical Warfare Service in War and Peace 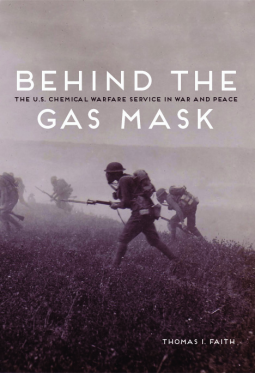 America was unprepared for World War I . The military was under manned, Equipment needed to be procured through the Allies, for example, planes from Britain and France were used by US forces. Both Britain and France want to train US troops and use American soldiers and Marines as filler in their ranks. Pershing rejected this and it delayed America’s effective entry into the war. One area that America ended up taking a lead in was in chemical weapons and chemical weapons defense.

I joined the Marines in the early 1980s and chemical warfare was considered a real threat if we ever actively engaged the Soviets. We heard stories of “Yellow Rain” and remembered the recent outbreak of anthrax in the Soviet Union, which the Soviets claimed was from bad meat. In boot camp we learned of chemical weapons, and as Marines, we learned to trust in our equipment. Through our training we learned that chemical would be used as a last resort and that it was mostly ineffective against properly trained and equipped troops. It would slow down an advance and frustrate the attacked troops. Chemical suits and masks would protect troops, but they were cumbersome, taxing, and awkward to wear. We gained confidence in our equipment through repeated use in a heavy tear gas environment.

At the beginning of the twentieth century things were different. No one expected chemical weapons to be used, but once chlorine used at Ypres the race was on to develop new poisons and effective protections. The Hague Convention of 1899 banned projectiles that sole purpose was to deliver asphyxiating chemicals. Even in war, an effort was made to abide by the letter of the law. At Ypres, canisters of chlorine were opened and the wind was used to move the gasses toward allied trenches — avoiding the use of projectiles. The British developed the Livens Projector, which also avoided using projectiles by lobbing gas canisters.

Faith gives a detailed account of chemical weapon in the war and perhaps even more interesting and less known history of the US Chemical Corps. Practicality and the almost propaganda like willingness of scientists and engineers to cooperate brought the US to the forefront of the chemical warfare development. The Gas Service Section was part of the Bureau of Mines as a very practical matter. Miners have a history of working in hostile environments and poison gasses. Scientists and engineers prided themselves on their work and their effort to help win the war. There is a sense of duty and teamwork that sets the stage for the Manhattan Project in the next war. New gas masks are developed, poison gas is produced on an industrial scale, lewisite was refined.

Despite the advances and technological advantage the US was developing, almost none of it reached Europe. The United States’ late entry to the war and the time it took to ramp up production lost out to the Armistice. The Chemical Corps now faced a problem of survival. Here is perhaps the more interesting story in the book: How a government agency fights for its continued existence when it is no longer needed. They turned their expertise to the the synthetic dye industry (captured German technology). Deadly chlorine gas could be used to promote health. Gassed soldiers had a low TB rate than the general public. President Coleridge received chlorine gas treatment for a cold. The chemical Corps also had readiness testing for US troops to ensure equipment stayed in production and to advertise the need for the Chemical Corps. There was even fear mongering. Just because the US policy is not to use chemical weapons, there is nothing stopping our enemies from using it on US troops.

The story of the development of the US Chemical Corps is extremely interesting two aspects. First, the development of protection and the production of gasses for the war effort in an industry that did not previously exist. Secondly, the story of a government agency trying to survive when its practical use seemed to be over. Here is an agency that went to great lengths to ensure its continuation: An agency that manufactured a higher form of killing trying to adopt a peacetime role in a world tired of the killing. Well worth the read for both histories.