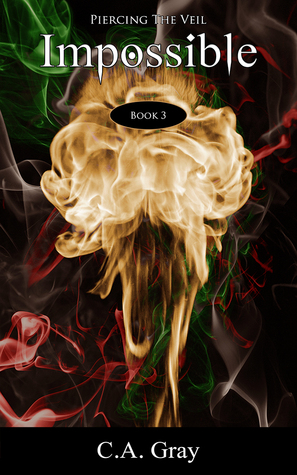 <<< SPOILERS This is the third novel in the series, and try as I might to keep plot elements from the first two novels out of this review, it is a difficult task. To the readers who have read the first two books, there are no spoilers below. To others, read the previous books in the series first. They are well worth the read.>>>

Intangible starts the series, sets the stage, introduces the characters, and introduces the story. Invincible explains the story and provides a very exciting, action filled run up to the concluding novel. Impossible brings the conclusion of the story. This novel is more strategy based than action packed. Peter and Lily are still the center of the story. After the setbacks in Invincible. Carlion must develop a new plan to defeat the Shadow Lord and his army of penumbra. Here the story crosses both realities. Isdemus, the leader at Carlion completes a plan to keep Peter and Lily safe. But, as the teenagers have demonstrated before, they do have a youthful problem with authority. Their pushing the limits and doing what they believe is right instead of what they are told has caused problems before.

Isdemus plans, separates, and secretly hides the two teens to keep them safe. Clarion’s brains focus on defeating the Shadow Lord and recovering the pieces of Excalibur. Lily’s rebellious nature brings her in contact with an unaligned penumbra, which starts a separate adventure that brings another mythology to the story.

The characters continue to act in the manner expected and developed throughout the story. There is growth in the young characters and an awkward budding relationship. New characters add an interesting twist to the story and add depth to the entire mythos. There are lessons to be learned too, especially about sowing the seeds of doubt and believing in oneself even when one is not sure of the outcome.

The story flows smoothly seamlessly blending into the second novel. The plot continues on a well defined course, although not always going where the reader expects. Impossible is an extraordinary finish to the series. There is closure, and most if not all questions the reader had through the series are answered. Piercing the Veil is a finely crafted adventure fantasy that fits perfectly into a trilogy. Each book presents a definite beginning and end point with Impossible bringing fulfilment to the series. An outstanding series for all ages.