Book Review: The Shock Doctrine: The Rise of Disaster Capitalism 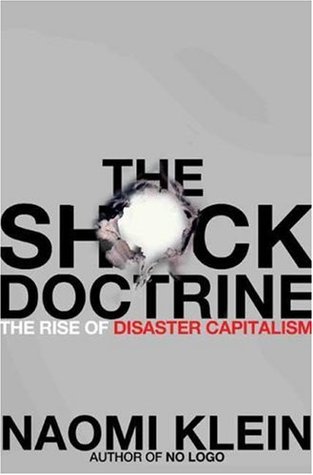 The Shock Doctrine: The Rise of Disaster Capitalism by Naomi Klein is the story of where and how capitalism is evolving in our society. I first heard Klein last week as a guest on Bill Mahr’s Real Time and I was pretty intrigued. I followed that up with watching her TED Talk and a trip to my local library. Klein is a writer, journalist, and film maker. She writes a syndicated column for The Nation and The Guardian, and covered the Iraq war for Harper’s. Her first book No Logo: Taking Aim at the Brand Bullies is on my short list.

People often ask me why do I read so much non-fiction when other concentrate their focus on fiction. Sometimes nonfiction can be as terrifying as a Stephen King novel. Sometimes it can be as disturbing as the best dystopian novels. Most of all it is real and is really happening. Klein captures this reality in The Shock Doctrine.

Shock therapy was once thought to clear the brain of the learned bad behaviors leaving a fresh slate to work with or a “cure.” Shock therapy was also tested to extract information government agencies wanted. This process has advanced to sensory deprivation followed by very loud noises and bright and flashing lights. The idea is to disorientate and wear down the prisoner. This works. With the idea that shocking a person into submissiveness works, can the same be idea be applied to a nation? Can a nation be shocked into changing ways and can the people be convinced that the new ways are the right ways?

The driving force in Shock Doctrine is Milton Friedman and the Chicago School. Fredman is a capitalist in the fullest sense. There should be no government interference in the economy. The economy is self correcting and vibrant when left alone. Keynesian Economics destroys freedom. Friedman was deeply disappointed in Nixon and his handling of the economy and his hands on approach. He later said there is more freedom in a dictatorship that has a hands off policy concerning the economy than a democracy with a hands on approach. With the US unwilling to make the drastic “shock” decisions with the economy his colleagues went to work in Chile trying to fight nationalization of key industries. The election of the socialist Allende and the beginnings of nationalization of copper and ITT. This brought pressure on Nixon and Kissinger to protect business interests. Allende was overthrown by a coup lead by Pinochet. The Chicago Boys (nationals trained by the Chicago School) and the Chicago school set up a drastic plan to “cure” Chile of socialism. The plan was also carried out by juntas in Brazil, Argentina, and Uruguay. Drastic privatization and allowing foreign ownership destroyed the economy of these countries. Nationalized industries are loyal to the nation. Private industry is loyal only to profits. Nationalization, although inefficient, creates jobs and markets.

Enemies were found in these countries. Chile had its infamous stadium holding centers and missing people. People who would be dragged away in the middle of the night never to be seen again. Some went to camps, some became bodies buried in walls, others were killed, had their stomachs cut open (so they would not float) and dropped into the ocean. The biggest group of people to disappear were workers. Any talk of organized labor was seen as a threat to the economy and dealt with harshly. Public gatherings were banned. In one case school children were arrested when as a group they asked for lower bus fares. Knowing that the governments could not arrest everyone involved in labor groups, but used the people they caught as examples to others.

The idea of shock treatment was also applied in Eastern Europe. Countries freed from the USSR looked to the west and the IMF and World Bank for help. The US only offered token aid and demanded that the previous governments debts would still be a valid debt. The IMF and World Bank programs came in with strings attached mostly with complete privatization and foreign ownership. What developed was a type of private colonization of newly freed counties. Klein treats Russia as a separate case from Eastern Europe. A very interest chapter on Thatcher is included. How a failing Prime Minister used a small war to claim victory against foreign enemies and turn her and the nation’s interests to defeating domestic enemies — coal miners union.

Shock and Awe was not only the invasion plan for Iraq, but also its economy. Foreign ownership and a “proper” constitution would part of the plan. Klein brings up an interesting point in war and occupation. There were requests for troops to protect the National Library and National Museum. These requests were ignored even though troops were available. In fact, there were cases where troops watched the looting. This was not just the loss of art. It was the loss of every dissertation written in Iraq, ancient texts, and art. In short it was the theft of a nation’s history and identity. It was part of the clean slate wanted by the US and international organizations and businesses.

The US was not immune from shock. Exactly twenty-seven years after the US sponsored coup in Chile, the US was attacked in what was to be known as the 9/11 attacks. This shock we caused us to accept ideas and laws we would not have otherwise considered. It is frightening to listen to the number of congressmen who did not read the Patriot Act before signing it. Their reasoning was something like “It was called the Patriot Act. How could I not sign it.” Suddenly people’s patriotism was questioned. “If you do not support “X” you are unAmerican.” became a rather common refrain. What can be done about war? The military wanted more troops Rumsfeld declined and responded with private security. Conflict was becoming a consumer service; War with a smile. There was at least one example of active duty Marines under the control of private security in combat.

Not all shocks are manmade. Klein covers the Tsunami in Sri Lanka, Katrina, and Lebanon’s aid delivery. Not everything is doom and gloom for Klein there is hope. Democracy and people in Latin America and Eastern Europe have stood up and embraced democracy and vote their interests. Shock Doctrine covers forty years of history in great deal. The work is more than adequately documented. Klein presents a clear argument of where shock capitalism came from and how it has expanded. I have pages and pages of notes on this book that I have not included in the review. Outstanding history with a contemporary implications.

5 responses to “Book Review: The Shock Doctrine: The Rise of Disaster Capitalism”