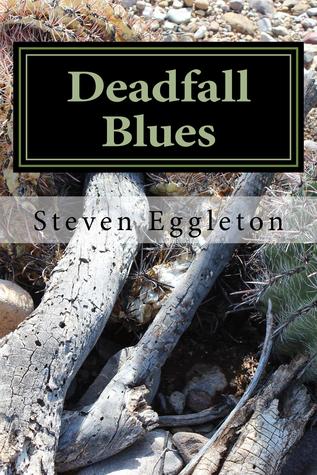 Deadfall Blues: Stories and Poems by Steven Eggleton is the newest release from the author of Dry Heat. Although Eggleton has a paragraph of biography, he keeps it short and to the point in Deadfall Blues: Steven Eggleton lives and works in Tucson, Arizona. He holds the unique distinction of being a completely self-taught writer. All else is conjecture.
One of the things I like about Eggleton’s writing is his ability to capture the southwest in a non-picture book form. Myself, growing up in Cleveland, Ohio can imagine Tucson as a cross between a very hot Cleveland and Lou Reed’s “Dirty Boulevard.” He captures a realistic Hispanic life from the simplistic neighborhoods to the city. There are matriarchal families and families with abusive fathers. Stories of a desire to leave Tucson and never come back and other that look back at the city with a weird sense of fondness.

The main characters are Hispanic males who tell a story with so much detail and feeling they seem autobiographical. I knew however, different events at the same age invalidate this line of thinking. The exception is the story “SB 1070.” That story is science fiction, at least for now. It refers to a constitutionally questionable law passed in Arizona in 2010.

There are lessons in several of the stories about wanting, desire, and that “something better.” This comes through in not only in wanting to move up socially but in friends, relationships and family. Eggleton manages to reach deeply and create realistic characters in real life situations. There is that feeling of honesty in the writing.

There are two stories that make up the bulk of the book and both are excellently written. Inserted between the main stories and the shorter stories a poems. The poems like the stories carry the same theme and fit well into the story collection. “Recollection Lost” was perhaps my favorite of the poems as the breaks between the lines had the feeling of waves going in and out fitting perfectly into the message of the poem. Likewise, “ Estate Sale” sets the stage perfectly for the moving story “The Teacup.”

Deadfall Blues is one of those books that is perfect for that hot, sunny, Texas November day or that chilly rainy northern afternoon. Even if the reader spends more than one sitting with this book, the stories and poems are short enough that it can easily be put down and picked up again without worry. I look forward to reading more of Eggleton’s writing in the future. He has a knack at capturing and writing completely developed characters, even in very short stories. An excellent read.